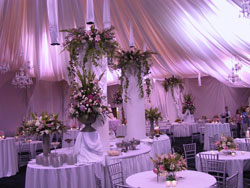 Marriage according Wikipedia, is defined as a social, religious, spiritual or legal union of individuals that creates kinship. This union is also called matrimony, and the ceremony that marks the union is called wedding. In general marriage is a social contract between two individuals that unites their lives legally, economically and emotionally. And to mark this unique event of bondage, a special occasion called wedding takes place.

Though the weddings differ according to geographical location, culture and the individuals involved in the union, in making this special union memorable, weddings are conducted with extra care and preparation. Still weddings have transformed from marking matrimony to some kind of display of economic and social status. Starting from the preparation of the ceremony for the due day, weddings are becoming very tiresome and extravagant. According to some studies, weddings on average cost around 50,000 dollars all over the world and brides spend around 200 hours in preparing for this special day and making it memorable.

Though there is no definite record of how and where weddings began, such ceremonies differ from place to place according to culture, religion and economic status. At present weddings have transformed both in magnitude and kind, to view some of the reforms of weddings in our culture, let me start with the dresses and go to the makeup and decoration of the reception hall, the bouquet, the invitation card and the list goes on. Though I am not against changes, some things should be considered in regards to one’s cultural and traditional values. Some bride and bride-maids’ dresses are very scanty that they can’t or shouldn’t be worn in the presence of elderly people. It is good adapt to latest fashion and every thing that goes with it but when and where and in presence of who should also be considered before wearing a dress that is going to disgrace you in front of all your family members. Once I remembered an elderly lady asking one of the bridesmaids “my daughter, are you ladies sharing one dress among the three of you”, to emphasize the size the dress.

Another thing that comes along with wedding spending beside fashion and style is spending on things like reception hall decoration, cars and bouquets and majority of those things happen to exist on the wedding not according to the taste of the groom and the bride but in comparison to the wedding of a friend or a relative. If a friend is married using a BMW, then this time you either must have a BMW or a Limousine. Be it in remote areas or in one of the cities the ritual of extravagant weddings seems contagious. Some even go to the extent of preparing to make to the Guines Book of Record like that of Brittney Spear’s marriage to Jason Alexander, which lasted 56 hours and one bride in china, wearing the longest wedding dress measuring 200 meters. And as for me, money spent in extravagant weddings could be used in some other useful things such as buying household items; it seems that people tend to forget about the couple once the wedding is over.

Despite all the preparation to make a wedding as perfect as can be, certain things do go wrong. The cameraman being drunk, the wedding cake late, the misplaced rings and last but least the band, are some of the irksome wedding glitches. Some cameramen seem to forget their responsibility and in addition to being drunk, they take it upon themselves to be the dancers of the day being present in the dance floor for every song. Though misplacing the rings and the late arrival of the cake seem also to be some of the common problems in a wedding. But what I really want to talk about is the “wedding songs”, I once witnessed a wedding which forced me to conclude that the singer either has a crush on the bride or is an ex- boyfriend because all the songs he sang in this particular day narrated about “break-ups”. And to make matters worse every member of the family including the bride and groom danced in all of the songs. As weddings are a union of two individuals, socially, spiritually and legally why not sing something that is about a new start and love. There are a zillion things that a singer can sing about in such occasions. I made a promise to choose the songs that would be sang in my wedding before the due day, because the song crises in weddings are appearing to be a problem in every wedding I attend lately.

At last my advice for any one who is planning to be married in the near future is that weddings are about the vows and love, and not about social or economic status. What is the use of spending money on something that is going to last for few hours when you are making a vow to spend the rest of your life with someone and have nothing at your house to begin this new journey of life?