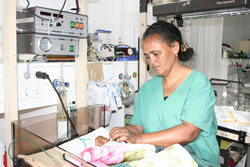 Building healthy families is central to any national development program and humanity at large. What comes closely associated with it is the need for safe Sexual and Reproductive Health (SRH) since it is one of the basic determinant of the very existence of humankind.

The complications of poor SRH could result in an increased of mortality and morbidity rates of the mother and the newborn, thereby reducing fertility rates. Based on the essential components of comprehensive reproductive health care, an integrated reproductive health package has been adopted in Eritrea. Through employing this strategy, Eritrea is trying to address the SRH-related problems from the grassroots level so as to find a lasting solution to the recurrence of such problems. To reduce maternal morbidity by 50 percent and to eliminate obstetric fistula by 100 percent have been among the targets that were set for the period of 2006-2010.

Although, high maternal mortality and morbidity rates in Eritrea had long been a critical issue, commendable achievements have been registered in reducing the figure by 63%.  The clear policies and practical endeavors to eliminate the factors that contribute to poor SRH through integrated mechanisms is a vivid indication of Eritrea’s commitment to the issue.

According to Dr. Birhana Haile, Head of Family Planning and Reproductive Health in the Ministry of Health, the mechanisms that have been employed for the reduction of mortality and morbidity rates include: rendering appropriate healthcare for women during pregnancy, childbirth, and from 40 days to some six weeks following delivery. With regard to prenatal care, pregnant women are highly encouraged to visit health centers for checkups. The mothers’ health before delivery, in deed, affects the health of the babies as well. Mothers who are anemic are more likely to give birth to anemic or underweight infants. If the mothers are treated well, however, the health of pregnant women and their babies will not be jeopardized. To this end, Eritrea is exerting strenuous efforts with a view to minimizing antenatal complications.

In connection with the set plan, the Ministry of Health clearly listed the areas that need to be included as major components of the strategic plan and has ranked them based on priorities.

Dr. Birhana said that utmost priority would be given to the promotion of family planning, for it could help a great deal in the reduction of maternal and child mortality and morbidity rates by 35 %. Prenatal and neonatal care has also been another part of the package given priority. Since the occurrence of SRH-related complications during childbirth and the days following delivery constitute for 65 % of the mortality rates, measures are being taken to address the problems that occur during childbirth and after delivery complications such as high blood pressure, and excessive bleeding. Drugs that could treat such complications are also ready in advance.

“As regards fistula complications, we have been planning to initially identify the existing problem in cooperation with different administrative areas within the country and treat the women with such problems as soon as possible in the year of 2010-2011. Above all, we are focused on the preventive mechanisms.  Usually, underage girls are at high risk for the development of fistula. However, if early marriage is deterred, 90 % of fistula occurrences could be eliminated,” the doctor said.

“Furthermore, first-time mothers should be encouraged to deliver in hospitals. The result of these integrated interventions would become a motivating force for the eradication of fistula and its complications,” she added.

According to the reports of the Ministry of Health, 65 % of Eritrea’s population has access to health services within the distance of only five kilometers. However, there still exists high mortality rate in the remote areas. To

solve such problems, Dr. Birhana explained that the ministry has opened waiting rooms for women in their eighth month of pregnancy in their respective areas and they are later taken to get healthcare assistance.

Though the ideal objective is to have women deliver in the health centers, at times when circumstances do not allow for such a solution, training is given to traditional midwives. “In such situation, we do not abandon the mother soon after birth; we conduct home visits six hours after delivery for different checkups. Following this, we also visit the mother within six days to check for likely infections.” Dr. Birhana added.

It is through this postpartum home visits that the lives of many mothers and newborns could be saved. As reports from the MoH indicate, in the first six months of 2007, out of the total 3,694 home visits for necessary medical care, 179 mothers and 72 neonates were found to have postpartum complications.

In conclusion, Dr. Birhana stated that if the Ministry works on the aforementioned areas, Eritrea would certainly meet the set goal of reducing maternal and child death rates by 75 percent in 2015.

The Asmara Cathedral: An Architectural Wonder