The Asmara Cathedral: An Architectural Wonder 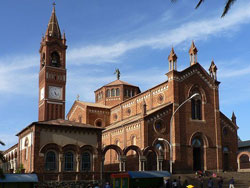 Apart from its towering external magnificence, the internal design and art deco of the Asmara Cathedral, located in the main streets of Asmara in the Liberation Avenue, is by far amongst the major architectural works of art in Africa. Most of the buildings in the main streets of the Liberation Avenue, particularly the Cathedral, were designed in the form of art deco and modernist styles giving Asmara quaint beauty and elegance.

Asmara is mainly known by its beautifully designed buildings representing the colonial architectures in Africa. These buildings were built during the Italian colonization after Mussolini came to power in 1922. According to history, Mussolini sought to establish Eritrea as a strong industrial base for Italian colonies in the Horn of Africa.

As a result, Eritrea, Asmara in particular became an experimental architectural laboratory in which new and exciting ideas could be tested by architects, engineers, and other craftsmen. One of these beautifully designed architectures in Asmara is that of the Cathedral or Cathedrale.

Before Cathedral was originally designed, it was named St. Mark’s Church, which was built in 1895 by an architect named Oreste Scanavini. Later after the church was rebuilt, the name was changed. Another architect called Mario Mazzetti designed the actual draft of the work in constructing the Cathedral.

The Cathedral was constructed from 1921 to September 1923 and was inaugurated in 1923, and is thought to be one of the finest Lombard – Romanesque –style churches outside Italy. Mario used a “Gothi Romano” style to build the catholic cathedral.

The imposing church is around 2500m long and 2000m wide. Around 52m high, the tower of the bell is made of visible face bricks. Generally, there are eight bells in the tower.

In addition to this, this amazing Cathedral has four clocks, which were built in 1924.These four clocks were mechanically timed to sound alarms every 15 minutes. They were electrically upgraded in 1992. What makes this electrical clock amazing and interesting is that, it doesn’t go retroactive, and just begins at the current time automatically.

The Cathedral also contains a small building, which used to be a school for Italian lawyers until 1958. Later when this school was closed it became a home for priests until it was again changed to a school for people of different ages and served as a clinic during the Ethiopian colonization.  Nowadays this building is serving as a kindergarten. The Institute of the Catholic Theological School is also found here.

On the other end of the Cathedral premises, another architecturally beautiful building built in 1925 provides a home for the priests. Furthermore, the first printing machine in the Horn of Africa is planted within the very walls of this building. This machine was first installed in Massawa, and then it was moved to Keren and later brought to Asmara. This printing machine published various books and magazines for the first time in Eritrea.

In addition to all these historical details, the internal premises of the Cathedral are also equally magnificent and wonderful. One who has never seen the inside of the church of course has to admire the external view, but the

inside is a work of art one would just gaze from top to bottom without a blink. This beautiful building consists of three arcs designed in a Roman style supported by three pillars each. There are also beautiful paintings of angels which makes the church much more attractive. These paintings include that of St. Joseph, St. Antonio, St. Rita, St. Francesco’s and others.

There is also a charming small house made of a skilfully sculpted wood in the eastern part of the church. Priests used this small house as a place for congregation, as microphones were not common during that time. Almost all the materials inside the church are made of olive wood, except the altar. The altar is made of Carrara marble, one of the most beautiful marbles in Italy.

There are three confession chambers and baptistery carved from Italian walnut inside the church. This church also consists of two other palaces in both the eastern and western parts, which used to be called as “Cantoria”. These amazing “Cantoria” palaces were used as a stage for the choir during the Italians. But nowadays they are keeping as great monuments.

The main and most important secret of this amazing building are the painting of the saint Mary surrounded by angels and the grave of Padre Camillo Carrara inside the church.

The Saint Mary portrait was painted around 1625 by one of the renowned Italian artists Carlo Maratta di Camerano. This painting was presented by Vitorio Emmanuel, King of Italy, during the inauguration of this Cathedral. According to a plaque inside the cathedral, Mussolini himself was a patron of this construction.

This imposing Cathedral in its Lombard- Romanesque style also has an amazing sculpture of the Padre who was the reverend of the church while it was being constructed.

There is a carefully designed sculpture of the Padre erected by the side of the tomb. There are also two plates of marble on both sides of the church. On the marble are engraved tributes for those individuals and organizations that helped in the construction of this building financially.

The Cathedral is a representation of the many wonders of the architectural heritage of Asmara. Its majestic structure is a focal point in the downtown area and a great tourist attraction.

The Cathedral, apart from being a place for worship has also become integrated into the daily lives of the Asmarinos. It is familiar to see people sitting around the entrance relaxing and the steps are a common meeting place for friends.

A Young Coach In Pursuit Of Training Best Players