Documenting precious treasure for the future 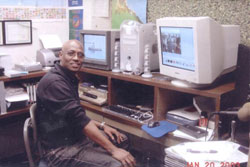 Mr. Zarai Haile is one of the freedom fighters-photographers during the armed struggle for liberation period. The valiant photographers and fighters of the time sacrificed their blood and toil to document the bravery and extraordinary feats of their fellow fighters. Mr. Zarai was head of the cinema unit of the EPLF from 1983 – 1991 and had been present in almost all major wars at that time as a cameraman. Having served in the same field for several years after independence, Mr. Zerai moved to Washington DC where he launched the Voice of Eritrea and Warsay TV in 1998 and 2000 respectively. Following are excerpts of the interview he conducted with Shabait:

Let’s start with your background; can you tell us something about yourself?

I was born in Asmara and attended school there till grade 7. I then moved to Addis Ababa where I continued my studies till tertiary level where I attended my first year of college studies at Addis Ababa University. Unfortunately, civil unrest broke out during the Haileselasse regime and I was compelled to terminate my studies. I moved to the US in 1971 where I began studying mechanical engineering at the Agricultural and Mechanical University of Alabama. I studied there until 3rd year. While I was there I used to go to Washington D.C. quite often during semester breaks where there was an active Eritrean political movement.

I was naturally easily influenced with the political atmosphere at that time. I could say that I was involved in students’ movement from an early age, i.e., while I was in grade 10, and was closely following the political movement of university students in Addis Ababa. By 1974, I was an active member of the Association of Eritrean Movement in Washington.

When and how did you join the Eritrean People’s Liberation Front?

Up on the request of the EPLF in the field for volunteers who could take short-courses on arts and electronic fields and then join the armed struggle, I together with three others volunteered for the task. In 1975 we attended classes in cinema institutions in New York for 6 months and joined the armed struggle in 1976.

When was the first time you took a picture in the fields?

After we finished military training we were immediately assigned to photograph the Zemach invasion. Unfortunately the war ended before we could get there. So we were only able to photograph Ethiopian prisoners of war. Thus, the first picture I took using supper 8 cameras was of these prisoners in the Girhu Sirnay area.

Can you tell us about the Photography Department of the EPLF when you first joined it?

The information section was divided in to two branches in Fah and Baqos area when I first become part of the photographic section. I was assigned in Baqos to take photos of the activities in the highlands using both still and motion cameras. Later on, the two sections were merged. We first began producing films during the 1st congress of EPLF, using 16-millimeter cameras. A cinematographic unit was formed in 1978, which was again re-formed in the 1980s.

At that time we used to send negative pictures abroad for developing and printing. But we established the first mobile laboratory of 16-millimeter films in Arag. As time went by we began to acquire modern equipments. We also trained a number of youngsters in 1983 with the help of the book I prepared titled Elementary Cinematography. Furthermore, we exhibited documentary and feature films to freedom fighters and civilians, which helped them to stay connected with the outside world.

How many films were produced before independence?

More than 40 documentary films including cultural films were produced. The first documentary in black and white film was Sewrana, a one hour-long film that was shot by 16 millimeter camera. Before that, a documentary film titled Eritrea 74 was produced in 1973 by a French photographer. The first color VHS film was produced in 1981. Moreover, about five feature films were produced, the first of which was Eti kali’e Kunat (popularly known as Kitaw).

Are there moments you remember particularly from your days of a cameraman before independence?

I have participated in a number of major wars but the most compelling was the war in Massawa (Fenkil) in1990. I sustained an injury during one of the battles but I was able to take good shots from the citadel, Forto, providing a panoramic view of the port city, remains of Ethiopian soldiers as well as the aftermath of the intensive bombings. Besides, other camera crewmembers also took some strangely amusing pictures. Kibtset and Massawa documentary films were produced from the shots we took during and after the Operation Fenkil.


Coming back to post independence period, tell us about what made you launch the Voice of Eritrea and Warsay TV in Washington D.C?

I went to US in 1997 to continue my education and soon after, the border conflict with Ethiopia broke out. Having no other source of information, but the western media. Thus I decided to launch a one-hour radio program in Tigrigna, which had the highest audience from other community radios in Washington DC area. I also started Warsay TV that was distributed in six TV networks and in 2003 it won the community television award.

Can you tell us about your future plans?

I want to produce documentary films that can be handed down to generations as forms of historical records. As yet, I have produced a music video on the best songs of Helen Mele’s until 2007 titled Helen Helena, another one on combating desertification in Eritrea, and also about the Green-belt of Eritrea, Semenawi Bahri, and Azel pharmaceuticals.