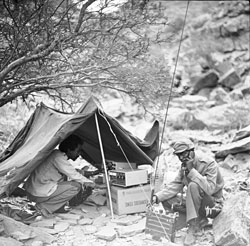 In this era of globalization where the world is being swayed by the power of information with each passing day, the Eritrean Ministry of Information is striving vigorously to build a competitive media outlet. A mass media that serves the truth and is acceptable at the regional and international level. This is a story of commitment, dedication and the realization of a vision that started with only a microphone and a few wires in the mountains of Sahel. This is the story of the Eritrean Mass Media that began from scratch and developed to the peak of information technology and digitalization.

Effective tasks have been carried out by the Ministry of Information as regards to conveying messages of peace and development to the people of the region to uphold the cause of justice and truth as well as to strengthen the unity of the Eritrean people. The ministry has been and still is engaged in transmitting information that portrays the peaceful nature of the people of Eritrea and one that reflects the reconstruction process across the nation.

Its contribution in preserving and endorsing cultural heritage and norms of the society is crucial. In fact the Eritrea Mass Media has registered remarkable outcomes in different arenas. The pace of modernizing the Ministry’s infrastructure in all standards has been gradual, but is without a doubt gaining strong momentum.

To begin with, the number of Eri-TV channels, days and hours of broadcast has been improving vastly through time. Determined to reinforce the contribution of media works, the Ministry has set up a second television channel for use within the country, while Eri-TV Channel One has been made available globally 24 hours a day via satellite.

Recently, the Ministry introduced modern technology and digitalized system to expand its scope. The fully digitalized Newsroom with computerized network connection as well as the recent transformation of the Radio-Voice of the Broad Masses to a digitalized system attests to this fact.

The progress of the Eritrean Mass Media isn’t restricted to television and radio but can also be seen in the modernized methodology that has been introduced in the printing press. Parallel to this, the various programs disseminated through radio in twelve languages, including all the Eritrean ethnic languages, aiming at satisfying the demands of the audience is noticeable.

The Voice of the Broad Masses Radio is available to audiences across the world via satellite, cable as well as radio in three channels. Furthermore, the Ministry has set up a competent Journalism Training Center in a bid to constantly upgrade its human resources. At various times the Ministry has offered and is offering at this very moment trainings in collaboration with other partners.

Developing human resource is one of the top priorities of the Ministry to ensure quality work. For that reason, the Ministry has been and is sending staff members for further vocational trainings abroad.

To attain the commendable achievements it has registered thus far, the Eritrean Mass Media had gone through immense adversities. History attests to the fact that the current stage the Eritrean Mass Media enjoys did not happen overnight. Eritreans took the first step to join the mainstream of modern mass media in the liberated area of Sahel, Fah. On 1st of January 1979, The Voice of the Broad Masses (Dimtsi Hafash) was launched.

Prior to this, the flow of information five or six years into the revolutionary armed struggle was more of oral recitation, until the circulation of booklets, which presented the front’s political situation from regional and geopolitical perspective. It was a call for a peaceful solution for self-determination.

Dimtsi Hafash, the source of hope for the Eritrean nationals, launched its broadcasting in Tigrinya and Arabic. It was stationed in a small tent with elementary equipments. The studio was semi-underground with a folding table and some chairs. It lacked sound proof systems, which made the pre-recording of the one hour program quite difficult, not to mention that the recording was done during the night for fear of enemy bombardment.

The dedication and sacrifice of the writers, broadcasters, technicians as well as the role of the fuel provision inspectors, switchers and other staff members had enabled Dimtsi Hafash to persist through the hard and trying times. Many brave Eritrean fighters gave their lives on different occasions for the continuity and success of the liberation radio whereby their dream of launching an EPLF-owned radio station was realized.

The stride that began with simple equipments in a tent that evolved to satellite and digitalized networks would continue at a great pace challenging the present situations. Within the premises of the Ministry of Information one can now observe a reliable media infrastructure for the Radio, Television and Printing Media Press.

Owing to the dedication and commitment of the liberation fighters who initiated the voice of hope and to those who carried on the legacy of hard work and resilience, the vision that started with only a microphone and a few wires in the mountains of Sahel has been realized.

Successful Investment In Human Resource To Boost The Health Sector