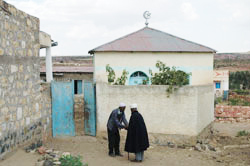 It is often said that adversity is the best teacher. It is in times of trial that people discover their strength and develop strong values. As a result of a difficult history the Eritrean people had developed many enviable values that have for so long been a source of their strength. One of the characteristic features of Eritrean culture is the people’s unity and harmony despite cultural, ethnic and religious differences. It is this unique feature that has guaranteed their very existence and befuddled their enemies. Eritrean people’s unity is woven into their very basic social fabric and can be witnessed in their everyday activities. Following is a story of a small village where the inhabitants went the extra mile to ensure a harmonious coexistence.

The around 500 inhabitants of the small village of Adi Zawl, some 40 kilometers southeast from the capital Asmara, make their living from farming and animal grazing. As with all small villages in the country, Adi Zawl does not have a police station; Eritreans are traditionally accustomed to resolving their own disputes peacefully in a highly civilized manner.

In the predominantly Christian community of Adi Zawl, there is only one Muslim family which had settled there more than 100 years ago. Though one would normally expect that the family would feel isolated under such circumstances, the entire village community lived in harmony as of the same faith. However, the communal harmony which was common to all Eritrean villages and towns was threatened by the ploys and maneuvers of the British Administration and the Imperial government of Ethiopia- during the period following the end of Italian colonization in 1941.

As part of the unrest that was being wrecked by Ethiopian and British agents in the country, the sole Muslim family of Adi Zawl, that of Mr. Sied Mohammed, came under attack. However, gathered together by the Church bell, the Christian members of the village stood by the Mr. Sied family and drove off those who tried to destroy the family in the name of religious difference.

Years after this incident, Mr. Sied died and his children moved away from the village. The family home remained close all these years, a poignant reminder of a much loved community member. To the delight of the villagers, the youngest son of the Sied Mohammed, Sheikh Beyan returned to his family home after pursuing studies for ten years. Soon after his return , Sheikh Beyan got married and started a family. The villagers were only too happy to help him start a new life and everyone pitched in with whatever they could. Sheikh Beyan’s serene family tableau was suddenly interrupted when the TPLF aggression broke out in 1998 and he had to leave his family to defend his country.

Meanwhile, the chief cleric of the church in the village, Pastor Russom Tesfatsion approached Sheikh Beyan about building a mosque. Pastor Russom felt it was wrong to remain passive that while the village had a church where followers can pray and attend mass, Sheikh Beyan’s family had no place of worship. Sheikh Beyan was surprised by the Pastor’s idea but was also happy at the same time. Soon a committee was formed to oversee the construction of the mosque and the work was completed in 2000.

Though the mosque was completed thanks to the initiative taken by Pastor Russom and the efforts of Shiekh Beyan and the villagers, it remained closed for a couple of years, for there was no one to open it. Unable to accept the fact the village mosque remained closed, Pastor Russom once again sought to remedy what he believed was missing in the village. Consequently, the Pastor traveled to Mendefera to talk to Sheikh Beyan’s unit commander about the importance of opening the village mosque.
The unit commander was quite astonished by the request of a Christian Pastor to have a Muslim Sheikh return to his village so that he can open a mosque. Indeed, this would seem strange to any outsider but it was quite a common and historic demonstration of the harmony among Eritrean communities of varying cultures and faiths. Sheikh Beyan was discharged from his duties within weeks and he was finally able to worship and pray at the mosque that he and his fellow villagers built of their own accord.

Documenting precious treasure for the future