“A Land Of Promise Never Kneels Down” 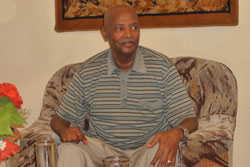 After a considerable time of illness and intensive health follow-up, Secretary of the PFDJ, Mr. Al-Amin Mohammed-Seid has been able to resume his regular activities. On the occasion of the 20th Anniversary of the Fenkil Operation, Mr. Al-Amin conducted an interview with shabait. Excerpts follow:

Let me start by saying that we are all happy to see that you have fully recovered. What message would you like to convey to the Eritrean people who have been waiting for your recovery?

I personally consider this occasion as a new chapter in my life. As a member of the Eritrean people who are always true to their promises, I am ready to carryout my duties. I would also like to extend my appreciation to all the people who were concerned about my health and I feel privileged to tell them that their worries have come to an end. As a matter of fact, the absence of a single individual would not hamper the march of progress because the entire Eritrean population is true to its pledge. When we say we have a wealthy country, our primary asset is the inherent patriotism inside every single national. The main reason the EPLF came out victorious is because of the presence of such precious values. To further articulate my statement, I was not really worried about work during my times of illness because I have a strong belief in my fellow comrades. Whatever I left behind during my illness was indeed in safe hands. In the culture and history of the EPLF, it is not single individuals that work miracles but the general public as a whole.

Coming back to matters at hand, what is the ultimate objective behind the recent sanctions imposed by US against Eritrea?

The reason why people stab you from behind is because you are ahead of them. The weak does not have an opponent, the strong on the other hand faces a number of oppositions and obstacles. Eritreans did not become masters of their own destiny thanks to the graciousness of others; it is our history of bravery and fortitude that brought us here, and above all, we are owners of our own plans and programs. For a number of reasons, one of the countries that couldn’t accept this fact is the United States. The US seeks to ensure control of the Horn of Africa and the Red Sea region along with countries that serve as its agents in the area. Controlling the Middle East and exploiting the resources in the area is also among its long-standing agendas. We are resolutely against this agenda and thus it is only natural that the US continues to antagonize Eritrea. The fact that this sanction was imposed recently doesn’t mean it never existed as an idea before. Besides, the UN Security Council was just used for packaging but the architect behind it is the United States. Furthermore, the nonsensical so called ‘facts’ presented as a reason for the sanction are unsubstantiated; the true motive was the United States’ gluttony. So it shouldn’t be a surprise; it is just another episode of the US Administration’s persistent antagonism that began in 1940s. The 1950s oppressions together with the Haileselassie regime and again the military assistance it extended to the communist Derg regime in 1970s to subdue the Eritrean revolution are some of the examples. Even after independence in 1991, the United States refrained from recognizing our self-determination. It was only after the 1993 referendum that the US was compelled to accept Eritrea as an independent nation. Again, this was just because it had sought to gain another agent in the region. Failing to subdue and subject Eritrea, the US Administration waged war against the country through the TPLF regime under the pretext of a border dispute. Yet again, this was a failure. Hence, what has been now imposed as sanction over Eritrea is another desperate attempt to subjugate the Eritrean people.  Washington’s attempt to lure in the Eritrean revolution in name of ‘peace talks’ in the late 1980s and early 1990s was also a conspiracy against the Eritrean people.  The recent sanctions resolution is therefore the very same tone in different words and time. Once again history will bear witness to the fact that Eritreans will prevail, just as they have always done.

Can we overcome this challenge or even turn it to our benefit?

Without a doubt we can, because we as a people never submit to any challenge we face. Our unity, which has always been our weapon and armor, is still intact. But of course we need to work together to change the challenges we face to our advantage. These are the times we need to reinforce our endeavors for a united stand. If we all stand and put extra efforts, there is no doubt that we can overcome the temporary obstacles and turn them to our own benefit. Yet again there is one point I need to underline; even though we know that the sanction is based on unsubstantiated allegations, we need not to relax thinking that it will be revoked soon. The best approach is to strengthen our unity and resilience.

Our political stance in the case of Somalia was cited among the reasons for the imposed sanction. What are your views on this?

The issue of Somalia is of no concern to the United States; they don’t care whether there is peace in that country or not. On the contrary, chaos and unrest in Somalia is their dream. More than any other country, Eritrea wishes for peace and stability in Somalia. Hence, Eritrea has always strived to see that the Somali issue is resolved by the Somalis themselves. The US used our policies as regards the Somali case to impose the sanctions. Had we not lived in a world where justice is swayed by superpowers, it is the US that should have been sanctioned. If the US were to refrain from meddling in the affairs of other countries, the world would be able to experience peace.

Any messages on the occasion of Fenkil Celebrations?

I carry lots of memories in connection with the Fenkil Operation. I remember with pride the times of heroism and unparalleled miracles. Fenkil operation did not only demonstrate Eritrean heroism but also redirected the historical track of the Horn of Africa. For that reason, I congratulate the Eritreans who stood there in particular and the entire Eritrean population in general.

Planning Ahead For Sustainable Agricultural Production