An End As Well As The Beginning 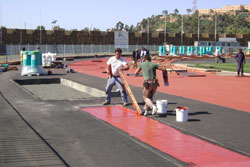 Eritrean Olympic Committee and Eritrean National Athletics Federation (ENAF) in association with International Olympic Committee (IOC) and IAAF laid synthetic track in Asmara Stadium at a total cost of 320,000 USD and additional 7 million Nakfa for the first time in the nation’s athletic history.

Upon its completion, on Sunday 7th February 2010, it was officially inaugurated in the presence of ministers, administrators, military officials, sports officials, athletes and other invited guests.

The dirt-tracked Asmara stadium is now covered by a synthetic Mondo track surface making an end as well as the beginning for athletes who used to suffer in international track competitions as they take part after getting their trainings in dirt track.

“It is a relief …. Finally!” exclaims one of Eritrea’s promising athletes.

The newly laid synthetic track can host different kinds of competitions. This will even help Eritrea to host some regional international competitions.

Some exhibition activities on high jump, discus, Shot put, javelin, steeple chase, long jump, triple jump, hurdle and pole-vault were presented to the officials on the inaugural. Eritrea is new to most of these activities in local and international activates. Taking this into consideration, President of the Eritrean national athletics federation Mr. Lu’ul Fessahaye underscored, “limited sports infrastructure has been the major setback in Eritrean athletes’ progress. Now that the government of Eritrea together with its partners has got it ready, we could see more promising Eritrean athletes”

Zerisenay Tadesse is one of a kind for Eritrea in getting over such infrastructural hiccups and bringing about Eritrea’s first medal in Olympics at Athens in 2004.