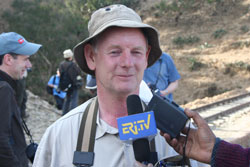 “Eritrean steam locomotive is spectacular and it is one of the best classic railways in the world,” were some of the remarks of many tourists who visited Eritrea last week. The 42-tourist group came from Australia, Denmark, Switzerland, Belgium, Holland, Germany, Austria and Italy. Some of the group members have came for more than a third, fourth and ninth time as they couldn’t get enough of the classic steam locomotive in a single trip. One of the tourists, Mr. Lindsay Rickard, 59, from Melbourne, Australia has worked in tram recovery and tourist steam railway as volunteer for 20 years now. Shabait interviewed Mr. Lindsay about his impressions of Eritrea and its classic locomotives. Excerpts follow:

How did you come to know about Eritrea?

I knew about Eritrea many years ago since I have been traveling in African countries from 1972 onwards though I didn’t have the chance to come. I had only met one person who had traveled on this railway and he said it was very spectacular and well worth visiting. So I knew it had been rebuilt which is quite an achievement and fascinating.

Tell us which places you visited in Eritrea?

On the first day of our arrival in the capital city of Asmara, we toured around Asmara and took pictures of the Art Deco buildings and it was interesting to see Italian influence particularly in Asmara. We traveled by car along the old railway from Asmara to Keren. It was fascinating to see the old stations and at the same time see the damage inflicted by war. Then we walked around 12kms towards Agordat from Keren.  Later on, we traveled to Shegrini, Arborobu’e, Ginda’e, Massawa and other places where we saw the scenic landscapes, mountain ranges, valleys and gorges.  We were able to observe the intriguing variety of cultures and heritages along the way. We also visited the locomotive workshop depot arch where we took photos.

How would you describe the people’s hospitality?

Well, the people are very generous. In one of our trips we were taking a short break and the local villagers invited us for a coffee ceremony. We saw the making of traditional coffee and drank three cups.  What surprised me was that these local villagers didn’t know any of us but they welcomed all ten of us. It was not part of the plan but a wonderful experience that came as a surprise.

What is your observation regarding the peace and stability in the places you have visited?

I don’t see any security problems. Anyone can walk on the streets during day or night without feeling threatened. Asmara must be the cleanest and safest city in Africa and it is a city with lots of character.

You have traveled many African countries, what is your general impression of Eritrea?

Eritrea is different, particularly the capital city and Massawa and Keren where you don’t encounter slum dwellers even though the people are not that affluent.  In many cities of different countries around the world you don’t feel safe because you find a lot of people sleeping in doorways, using the street as toilet, you don’t find such things in Eritrea.

What do you think about the railway?

It is magnificent and is similar to India’s famous railway. There aren’t many places in the world where you see such spectacular railways. Eritrean railway is unique as it was built with very high standard with solid bridges and viaducts. I believe tourists would love to take rides in these trains. It would be a classic, very quaint and stunning experience.  I admire the work these railway men put in to running a tour like this. They deserve credit for their commitment and ingenuity. They do tremendous job with the limited resources they have.

What do you think should be done to make it more attractive to tourists?

From a tourist’s point of view, it really needs marketing or advertising to enhance people’s knowledge of its presence. Maybe one day this railway could get similar international heritage listing like that of India. It is not only the railway that deserves recognition in Eritrea but also the monasteries, coral reefs in the Red Sea and Dahlak Islands.

Are you planning to come back here?

I would love to come back with my wife and show the photos I took to my friends.

I want to express my appreciation to the Eritrean government, tourist organizations, the local people in general and of course the railway personnel. Overall it was a pleasant experience visiting Eritrea and I thoroughly enjoyed it. If anyone asks me about Eritrea I can honestly say yes by all means come to Eritrea and you will love the cappuccino and macchiato and traditional coffee. If you ever get opportunity to have the traditional coffee ceremony, don’t miss it, enjoy.

Why March with Eritreans