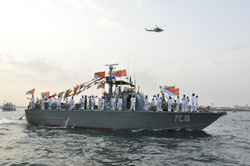 Misty weather carrying pleasant breeze of the sea welcomes one to port city of Massawa and accompanies you with an atmosphere of festivity. Massawa just celebrated the 20th anniversary of the Fenkil Operation—the operation that paved the way for independence—from 11 to 14 February, 2010.

A three month preparation was made to colorfully celebrate the historic event. Different programs that are first of their kind were also arranged. The celebration that began on Thursday, with a general knowledge contest among the marine science and technology students continued in the afternoon with a feature film titled “Medre-Mayawyan Anabs” roughly translated as Amphibious Lions.  As the title indicates, the film shows the naval operations of the EPLF and the organizational efficiency with which remarkable feats were executed.

Following the songs, recitation of poems and narrations about the ordeals of the 1977 Salina war, in the morning hours of Friday, Secretary of the PFDJ, Mr. Al-Amin Mohammed Seid opened the exhibitions that featured various shows; some of which were pictorial depictions of Massawa in times of war and its current renewed image. Massawa’s international airport, the cement factory, activities of different construction companies, and other cultural and natural resources of the Northern Red Sea Region were also among the contents of the exhibition.

In the evening hours of the same day, “Hinko Segalet” a documentary film that narrates the obstruction the EPLF forces faced to pass through a narrow pathway with both sides surrounded by the sea, and the sacrifices it demanded to fully lib

erate Massawa was screened at the Red Sea Hotel. The bitter hardship faced during the Fenkil Operation, strong determination and steadfastness of the freedom fighters, the brutality and miscalculated assumptions of the enemy, the subtle tactics of the EPLF forces, the harmony that existed between the land forces and the very young navy, and above all the concern and responsibility of EPLF to avoid any harm from befalling the civilian population include some of the vivid contents of the film.

According to the story presented in the documentary film the then EPLF navy had only 100 members, most of whom were new to such endeavors, and a few fishing boats that were modified to fit with the outlined military operation. This small and inexperienced force fought with the abundantly armed Ethiopian navy that had 35 years of experience and completely defeated it.

The skies of Massawa that used to be disturbed by air raids and bombardments of the enemy has now in this commemorative event, began flights from Asmara, and international flights have also been scheduled to be conducted twice a week. In the afternoon, people started to gather in communal tents and marched towards the port to observe the official closing of the ceremony displaying different slogans and chanting different songs. The whistling sound of the steam locomotive that passed along the beach mingled with the chanting of slogans gave the atmosphere an aura of merriment.

The commemorative event of the Fenkil Operation was staged exclusively on the sea without any connecting bridge. At 4 pm a song titled “Bahrna” meaning our sea became the

first to commence the program. Following which Mr. Ahmed Hajj, chair person of the Holidays Coordinating Committee in the Northern Red Sea Region said that our national festivities have a greater message in that they are a means we employ to be always keen on remembering our heroic feats, respecting our pledge to the martyrs, and keeping our unity intact.  He further said that this year’s theme “Bequeathment for full Emancipation” indicates that the country is on the process of bequeathing to successive generations and it reminds us to strongly work for the realization of full emancipation.

Next was a musical drama “Aytitefi’en Eya Birhan’na” or “Our light shall not dim away” depicts that as we surmounted huge obstacles depending only on ourselves, this time also we are in a better position to tackle any threat through our commitment as we did before. It is a reflection of Eritrean confidence that has been passing over to the children as well—Bequeathment for full emancipation. This was further enhanced by Frehiwet’s song “Nkid”- let’s march—let’s march in the principle of pragmatism heedless of the ploys that have been waved to keep us hostages—let’s march ceaselessly . . . Divers also colorfully accompanied the song waving flags and displaying different slogans.
Taking the stage next Mrs. Tsegereda Weldegiorgis, Administrator of the Northern Red Sea said that the testimony of our pledge to the Fenkil Operation and other difficult hurdles that we passed through has been the achievement we registered in the past 20 years in realizing social justice and all-round development.

In his speech at the occasion, President I

saias Afwerki said that Eritrea shall never be derailed from its independent political path, irrespective of the persistently waved sabotages and hostilities. He further pointed out that the firm stance of Eritrean nationals inside the country and abroad to rebuff any challenge, any hindrance stands as a remarkable token of the awareness of the people to the schemes that have continued since long.

As part of the official ceremony that was held on Saturday 13th of February 2010, a sea carnival which was first of its kind was presented with the collaboration of the Eritrean navy, regional administration, PFDJ cultural affairs, and other institutions. The Carnival portrayed the passing over of the rich Eritrean values to the young generation.  In the carnival some marine species that are on the verge of extinction were presented and the importance of protecting the bio diversity was presented through the boats modified into the images of sea animals. A boat with a sail of a female fighter’s portrait floated over the sea next to the animal images. The painting was hanged in a weaved mat stretched on two posts that it resembled as standing on the air on its own. Observing these different shows of the modern navy, swift boat movements, and tag boats spraying water through the fountains makes one to wander here and there to capture the temporarily created beautiful scenery.

Different sports activities were also part of the ceremony. On Sunday, final football and camel contests were held and winners of the 20th Fenkil anniversary received awards. People also celebrated the event in communal tents of administrative areas. Through this the celebrations of this big national event concluded colorfully.