Driving into the Clouds Filfil-Massawa Road 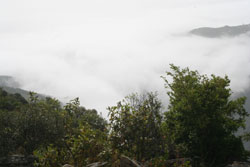 Shortly after take off, it is very natural to see a plane disappear into the clouds especially when the sky is not clear. But one would think it is difficult to actually drive into the clouds and descend into steep escarpment penetrating the clouds that fall on the hairpin twists of the Filfil-Massawa road. Among the major tourism attraction roads that Eritrea boasts of is the Filfil-Massawa road. This newly built road is an outstanding accomplishment among the various infrastructure projects undertaken by the government of Eritrea.

What makes the road very important is that it is a part of the Eritrean green belt region, which gets rainy season twice a year. For that reason the road is always green and the forestry is very thick. With such thick forestry that covers every square inch of the surroundings one can imagine the variety of wildlife that use the area as a haven. All of these summed up with the unpolluted natural scenery while descending towards Massawa makes the road one of the must-visit places in Eritrea.

Just by the side of the road upon starting the beautiful scenic perspective of forestry and mystic condition is a huge writing, which says, Take nothing but photos, Leave nothing but footprints. Indeed, the place is so tempting that everyone would want something but of course would ruin the beauty and it would be so polluting to leave some waste behind.

During my first experience down that road, I completed the entire drive of around 80 kilometers on the tip of the rear car seat just to enjoy every single thing along the way. I couldn’t let the chauffeur drive because I wanted to stop after every 200 meters to take pictures of all the new things I came to see on the way. Most amazing of all, we came just face to face with a handful of deer crossing the road, and they didn’t care to run away from our presence.

Around five months ago, a foreign visitor was going down that road and he couldn’t believe that he was actually descending into the cloud, while driving and the words he used to express the adventure was, “I looked up to the sky and I looked down which still happened to be the sky, but I was not in an airplane”.
Since its finalization in 2002, the road has been used as the main travel route to Massawa and it has been frequented, especially by foreign visitors, ever since. But not only that, the government of Eritrea also has found a way to utilize the foggy climate in the area for developmental purposes. Fog is being harvested to alleviate water shortage problems in the area.

The Filfil road to Massawa takes a little around an hour more than the Nefasit road, but the scenic beauty it has and the fresh highland-lowland mixture of temperate climate makes it well worth it. Half way between Serejeka and Filfil, there are two recreation centers where people often stop by for coffee or meal, and the location of those places is yet another mentionable locations from the tourism package in the area, where they provide a commanding perspective of the vegetation beneath.

A lot could be said about the infrastructural achievements the government registered in the years following independence, but most definitely, the one project that matches the beauty and ingenuity of this road is the Igla-Demhina road, which will soon be another incredible achievement.

It could be long and tiring, but the best part is, these two roads form a triangle of tourism attraction alignment through Massawa and Foro, through the use of which one will be able to see prehistoric sites, marine resources, monasteries nearly as old as the Christian religion, one of the oldest mosques in Africa as well as experiencing from temperate to the hottest climatic condition.

Resolution 1907: An adventurism Targeted to the Horn of Africa