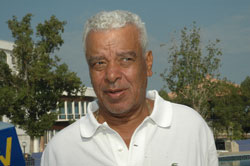 One who knew Massawa before twenty years would be definitely surprised and may not believe he is visiting the same destination. The port city, which was once severely devastated by war, is now regaining the beauty and glamour it had more than ever. In addition to the infrastructural activities that have been carried out under public projects, private investors have also been contributing their share in the re-making of Massawa. Mr. Primo Giovanni is one among those who took such initiative.

Could you tell us a little about your life in Eritrea before independence?

I grew up in Asmara in the area known as Akria. Life under Ethiopian colonial rule was difficult especially for the young people and thus I was compelled to leave my country and move to Italy.

Can you tell us about your investment ventures in Massawa?

When I returned to Eritrea in the early days of independence, I visited Massawa and saw that everything was destroyed; all its buildings darkened by the bombardments and Torino Hotel totally covered in smoke. Then I thought of participating in renovating the city with my fellow Eritreans. Even during the period of armed struggle when I was in Italy I often thought of Eritrea and I was also very optimistic and certain that Eritrea would one day become independent. Following independence I came back to Eritrea and began contemplating of making various investments.

Have you invested in any project other than the Dahlak Grand Hotel?

Yes, I first purchased and renovated the former Keren Hotel, which is now Albergo Italia in Asmara. The hotel is now rendering good services with 18 rooms and 58 employees. I am also building a hotel in the Dessie Island, which is 36 kilometers from Massawa. This hotel as well is expected to give services in the next three months with the completion of 21 Hidmo suites and 27 huts.

Do you believe that Dahlak Grand Hotel would attract many visitors?

I could say there would be a number of visitors who would like to stay in the hotel. We may not even accommodate them all. Once the hotel starts to give services there would be many guests flocking here. There are many people who wish to visit the Eritrean islands and this hotel is ready to give full services including sea travels. Any one who wishes to sail out to far islands would be welcomed to have the chance with the small boats and a medium sized ship that could accommodate 150 up to 200 passengers in its 38 rooms.

Though our hotel is in par with five star hotels, for the time being, we would rank it as a four star hotel. The hotel was built with an idea to accommodate both individual needs as well as large families. It can host from 500 to 700 clients at once in the 206 spacious rooms. The rooms are all well furnished with telephone services, multi-channeled TV, refrigerator, and automatic ventilation system. The hotel also comprises three restaurants, six bars, cinema, a conference hall, a swimming pool. Moreover, when the hotel starts to render full services it would create employment opportunity for around 350 people.

Tell us about some of the antique doors found in this hotel?

I am a craftsman and very much enjoy collecting antiques. I have an antiquities shop in Milano Italy. I also used to sell souvenirs. That is why I imported the well-designed doors that represent the Ottomans and the Portuguese, and these doors are really fascinating.

How would you describe the investment opportunities in Eritrea?

The finalization of this project would not be possible without the full cooperation of the relevant authorities.  In fact, Eritrea is a land of boundless opportunities for those who would like to invest in any sector. This conducive atmosphere, coupled with the heart-warming hospitality of the Eritrean people encourages one to invest more in this country.

When will the Dahlak Grand Hotel be officially inaugurated?

Though it was temporarily opened to accommodate visitors who participated in the 20th anniversary of Fenkil operation celebrations, it would be officially inaugurated on the 19th Independence Anniversary on May 24, 2010.