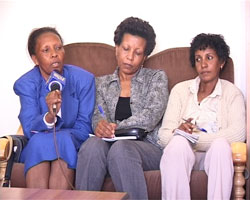 The issue of equality between men and women has long since been a highly discussed issue in our world. The question of unequal rights between men and women seems to persist even in the developed world, where feminist movements had began much earlier than the rest of the world. In earlier times, women’s place in society was restricted to the home, bearing children, cooking, washing; a role which has been accepted as a norm for women all over the world. However, the traditionally accepted role of women is no longer viable in today’s world of technological and cultural advancement where women are making their own place in what was before men’s niche. Women have become involved even in the most difficult fields that used to be considered as men’s job like medicine, physics, chemistry and astronomy. And the participation of women in those fields is creating a great controversy; for the majority of men don’t seem to accept these new changes in job sharing.

In the beginning of the 21st century, despite numerous efforts by women to establish careers, they were earning a lot less than their male counterparts while still working the same jobs and performing the same tasks. The reasons given for such display of double standards is that women begin to put in less hours of work once they get married and have children. In my opinion what needs to be considered here is the capability and commitment a person has towards work, irrespective of his/her gender. It is such discrimination among men and women in the work place that has given rise to modern day gender equality struggles.

The second wave of feminist movements focused as much on fighting social and cultural inequalities as political inequalities in 1960s.This was also the time when Eritrean women began joining the armed struggle for liberation. The Eritrean women who had fought in liberating their country had broken all preconceived biases towards women by fighting equally along the male freedom fighters. However, soon after independence, these women were compelled to assume traditional roles of women they had left behind.

Let me give you a simple example how the society views women of the country. If a girl is a doctor, a physician or an astrologist or even discovered the cure to cancer, the first question that comes up is; “Is she married or does she have kids?” and if the answer is no trust me the explanation and the preaching will be unexpected and no one would care that the cure to cancer was found. And if this lady is married and has kids, the questions shifts to “How was she able to do it? What was the husband saying while she was spending so many hours outside the house?” And the worst scenario will be the husband believing or considering those remarks.  Some even go to the extent of commenting to the husband: “Why would you be tied to someone who doesn’t know her place in house?” In general the whole society expects women to be like those in the movie “the Stepford wives”, loyal to their husbands and their kitchen.

I even have a friend who says the wife he marries must spend her whole day in the kitchen, professional women are half men, and they are not real women. And this friend of mine is an educated person who sees a lot of successful women in his day to day activity. No wonder the women of the world established movements that defend their social and political values in society.

Eritrean women have achieved many reforms in the political and social values of the society; they have 30% seats in the country’s parliament, and many of the stereotypes have been overcome but there are still issues that need to be reformed like that of land ownership, and marriage. Because there are people who think like my friend mentioned above and the attitudes of those people should be changed. Successful women should be viewed as model citizens by both men and women of the society otherwise there will be no change in perceptions.

If your husband or brother expects you to wash the clothes, cook and clean after you both arrive at 6 pm in the afternoon from work and while you are rushing to do three things at a time, he might be at the sofa with a remote in his hand not lifting a finger to help you, it is probably because he thinks its your job. Even if men don’t believe in women’s equality they should at least help them around the house for the sake of morality. After all there is no such thing as women’s job or men’s job it is all the way we see things.