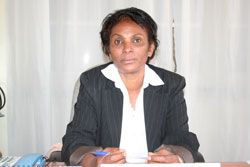 The international women’s day, March 8, will be celebrated worldwide on Monday. This annually commemorated day reminds us about the daily struggle of women to ensure their equal rights in all aspects of life while maintaining the already attained achievement in socio-economic and political domains. It is also an event that calls on people of all walks of life to challenge gender discriminations and ensure equal opportunities for both genders. In connection with upcoming commemoration of March 8, Shabait conducted an interview with the Head of the branch office of the National Union of Eritrean Women (NUEW) in the Central region, Ms. Teke’a Tesfamichael. Excerpts follow:

Let’s start with the main tasks of the branch office of the NUEW in the Central region?

Our branch has its own structure and extends over 3 sub-zones and 13 administrative areas. Its organization ranges from the village level up to higher institutions in order of geographical location and profession. Our main objective is to enhance women’s awareness about their rights and assist them to become self-supporting both socially and economically.

What activities has the branch office accomplished in the past year?

We offered various forms of training to disadvantaged women. Last year, a total of 30 women completed handicraft training. Moreover, micro-scale credit was provided to disadvantaged women so that they can become self-supporting. Many of them were able to open small business ventures, breed livestock and engage in other agricultural activities.
Moreover, we conducted an extensive research as regards women workers in connection with the 30th anniversary of the NUEW, since 70 % of working women in the country are found in the capital city.  In addition to this, a parade that extended for three days and an exhibition that highlights women’s role in society were carried out.

How much would you say gender awareness has progressed in the society?

Basically, the primary objective of the union is to ensure gender equality through promoting awareness. All the economic and other assistance extended by the union is secondary. Generally speaking, people’s perspective regarding gender is influenced by traditional norms that often undervalue women’s role. Thus, effecting a change in people’s understanding towards women is vital in ensuring equal participation of both genders in social, economic and political domains.  It is difficult to conclude that every educated person is gender conscious in view of the fact that knowing and applying something are two different things. I could say that we have accomplished commendable progress compared to other traditional societies in the world. But we need to carry out further extensive campaigns and we, women ought to take the leading role in fighting for our rights.

What about the progress made in combating FGM and underage marriage?

Though we don’t have precise figures about the declining number of FGM, people have become more aware of its negative consequences. In line with this, more and more pregnant women these days are seeking medical attention during which they are given counseling about the harmful consequences of FGM. Of course a law has been adopted that prohibits such kind of practices but since this is usually done in secret the need for more awareness creation campaigns becomes more vital. As regards to underage marriage, we are planning to conduct a research to acquire clear information about it so as to take the necessary majors.

What action plans has your branch office outlined for this year?

We are planning to provide an outlet for the handicraft trainees in collaboration with the administration of the Central region and conduct a research to find out in which areas women could easily generate income. We are also endeavoring to strengthen young female students to continue the struggle towards ensuring equal participation of women in all sectors of the economy.

What can you tell us about the preparations to celebrate March 8?

March 8 this year is being observed at a time when the Eritrean people are strengthening their unity to resolutely rebuff hostile conspiracies from the outside. For us Eritrean women, March 8 will be an occasion in which we reiterate readiness to strengthen our resistance against all odds. Our main theme for this year reflects women’s readiness to strengthen the people’s unity and foil the continued hostilities against the country. We will also hold an award ceremony in which 300 female students who showed outstanding performance in their education will be recognized.

GONE ARE THE DAYS OF NAIVETY