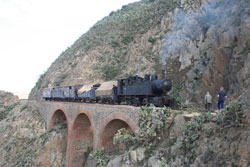 When driving a few kilometers down to Massawa through the Asmara-Massawa road the amazing railway lines accompanies a traveler and never abandons its companion till he/she reaches the coastal areas.  It just changes from right side to the left side of the asphalted road as if it is trying not to make one feel bored of following the same pathway.

Eritrea’s railway is constructed on a captivating landscape. One who sees this railway system for the first time becomes more eager to revisit it time and again. It never lets one’s attention deviate from its panoramic beauty. The extraordinary engineering works coupled with the uniqueness of the century old steam locomotive makes one experience one of the rare chances of traveling through such railways.

Though it had been out of function for many years, it was once again renovated beginning in 1994. At this time the locomotive transport system is gaining international acclaim. Foreign vacationers who visited Eritrea and experienced such exciting sceneries were further awed when they discovered the prevailing peace and stability in the country coupled with the heart-warming hospitality of the people. Testimonies of these visiting foreigners about the rich tourism potentials Eritrea is endowed are epitomes to what has been mentioned above.

Recently a group of foreign visitors traveled to Massawa using the steam locomotive. These 42 vacationers are from Austria, Switzerland, Denmark, Germany, Netherlands, Australia, Belgium and Italy. They all spoke excitedly about the tourism potentials and especially the unique topography through which the steam locomotive passes.

Mr. Tony Schweitzer from Switzerland, who came to Eritrea for the second time, said that he was very much captivated during his first stay and he published a DVD about the steam train which was very successful. As regards the cordiality of the Eritrean people he said: “Eritrea is a very nice country, its people are very friendly. But in Europe people are very afraid to come to Eritrea because of misinformation about the prevailing situation in the country, but when you are here there is no problem at all.”

Mr. Peter Tshulki from Austria on his part said that he is visiting Eritrea for the 9th time because he enjoyed experiencing the absolutely unique steam locomotive again and again. While expressing the point that makes him keen to observe this aged railway system he said: “In my country, I was a member of enthusiasts on the preservation of national heritage, with a special focus on steam locomotives, carriages, and cultural relics as well.”

Mr. Peter added that he has been welcomed from his first visit as a guest and enjoyed the hospitability which is incomparable to anywhere in the world. In addition to this he said: “The railways staff has also welcomed me with great warmth as their old friend and I do not have any complaints at all. Eritrea is the safest place to walk around at any time of the day. I have not been bothered anywhere in the country so I feel safe and at home.”

Another visitor from Germany, who is also a member of a group of railway enthusiasts, describes Eritrean railway line as the top ten from the entire world. So that he comes every year to see this fascinating line as an adventure. While the steam locomotive was passing with its whistling sound he gaily describes the atmosphere and the excitement it creates for him especially the alternating turns of the railroad. They took pictures of the tunnel and bridges with great enthusiasm.

Also a member of the visiting group, Mr. Iyovlen Vivegard from Denmark visited Eritrea for the first time to observe the steam locomotive.  He said that he came to Eritrea with a

distorted perception; however, contrary to his expectation he witnessed a very different reality of peace and stability.

Testimonies of these tourists about the Eritrean people and the prevailing peace and stability are common tenets which they all agree on. Mr. Lindsay Richard from Australia said that he knows Eritrea since long ago though he is visiting the country in person for the first time. He also said that Asmara is the safest city in Africa.

These foreign vacationers are a group of photographers, railway system experts, and enthusiasts of the locomotives who came to this country for different purposes; some of them for adventure, and others to record the mesmerizing scenery with their lenses. Mr. Stefano Gazzoli an employee of the Italian railway explained that he knew about the history of the Eritrean railway while he was in Italy. However, he used the short stay in Eritrea to make records. He has also plans to visit Eritrea again along with his family.

The tourists altogether agreed on the beauty of the varying climate and landscape of the country. One could experience three seasons in two hours by just driving down a few kilometers from the capital towards the eastern escarpment. Nonetheless, the Eritrean tourism sector is still an unexploited asset that needs more publicity.

The railway system is still in good working condition despite being a century old. What greatly amazed the tourists, however, was the rebuilding of the railway and making the system to operate again relaying solely on local resources.