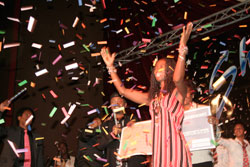 The first time she appeared on the first phase of Shingrwa’s second season Arafa Hamid’s golden voice was quite apparent. Many audience members from the start believed that she would make it to the finals. The young singer was awarded 80,000 Nakfa as she stood first in the final stage of the contest from 350 competitors. Arafa Hamid conducted a brief interview with Shabait concerning her experience in the world of music. Excerpts follow:

Let’s begin with your background?

I was born in Barentu town in 1983 and completed my academic studies there. I got married in 2006. I was interested in music from early on. My family had a farmland about 2 hours walk from our house and I usually preferred to go there and sing my heart out while admiring the nature around me. Early in the morning, I wake from my bed singing and sometimes my neighbors were wondering what I was singing the whole day. I love singing, it is everything to me.

When and how did you begin singing in public?

During the second offensive of the TPLF aggression, 1999, my friends and I used to go to hospitals to assist the war injured members of the Eritrean Defense Forces (EDF). Seeing the bravery of the young EDF members, I decided to highlight their bravery and express my appreciation through singing. Hence, I went to Barentu’s National Union of Eritrean Youth and Students music club, which had 9 members with only one musical instrument. I presented my own song in Kunama in my first practice time, which was about the brave fighters. Afterward, this song was recorded by journalists and transmitted through Dimitsi Hafash. And the feedback was so encouraging.

Have you ever taken any musical course prior to your first performance?

Never, but I was curiously following any musical performance staged in any festival or cultural show. I think this helped me to compose my first song without much difficulty.

When did you decide to participate in Shingrwa competition?

The first time I heard that music competition has begun, I quickly registered. Unfortunately, however I couldn’t participate in the first competition because of family problems. Even in the second season competition I was reluctant to participate, but with the support of the youth association in Barentu and the administrator I was able to take part.

Was there a time you doubted your ability to perform?

Yes, in the second phase of the competition, I couldn’t even remember how I performed until I saw it on video.  It was hard for me to cope with the music and at the same time sing live controlling stage and reflect my natural talent.

How would you describe Kunama musical culture?

Music is part of cultural identity of a society and the Kunama ethnic group have a very unique and rich musical traditions. They are endowed with various traditions of music varied in terms of dance style, rhythm, customs; each uniquely highlighting weddings, war, love, mourning etc.

So what should we expect from you in the future?

A lot of musicians are encouraging me to accomplish something tangible and I am determined to make every effort to please my audience and supporters. I also want to infuse modern rhythms with traditional Kunama music in relation to other African counties as there is a lot of similarity between Kunam and other African cultures. Furthermore, I will work hard to promote my singing ability in Arabic, Nara and Tigrinya.

What do you think is the role of Shingrwa in boosting the art of music in the country?

I think Shingrwa could play a very decisive role in developing music in the country. It is apparent how the contestants were improving their ability in different phases of the show. Speaking for myself, if there was no Shingrwa program I wouldn’t have known how to begin or develop a singing career as I have been removed from singing for almost three years.

Is there any local singer you admire from in particular?

I admire all the musicians in our country and whenever there is an interview with any artist, I skip all my activities to listen to it. My ambition is to reach the stage where the best singers have reached. I am also a fan of Arabic singers.

I am glad that Shingrwa began and I hope it would develop more in the future. As a female winner of Shingrwa contest on the eve of March 8, I feel responsible to reflect my culture through music and do my level best to live up to my fans’ expectations.  Finally, I would like to express my appreciation to my family for their constant support, the Shingrwa committee and my fans.