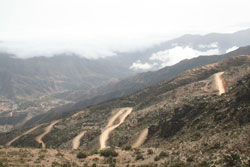 Every corner of the country including the remote areas has been interconnected through a network of roads as part of the ongoing infrastructural activities. The communication and transportation gap between the cities and rural areas has also been narrowed. If it was difficult to give good services of any kind due to the lack of roads it has now become a matter of minutes or hours to transport people and commodities from and to different places. Even though very near to the capital Asmara, some areas remained inaccessible due to mountainous and uneven landforms. The inhabitants of such places had no alternative but to use traditional methods of transport of domestic animals, making it difficult for the elderly, pregnant women and the ailing to travel to the nearest health station.

However, many of such problems have been solved through the interventions taken to build connecting roads.  If the different areas are connected with road network, service rendering institutions and business enterprises would be able to provide better services.

The 16 km-long Beleza-Durfo road, which is expected to play an important role in alleviating transportation problems of the people of Durfo and its surroundings, is among the roads that have recently been constructed with an expenditure of 28 million Nakfa.

The workers who participated in the construction of this road explained that the task was very difficult as the topography of the area is full of steep slopes and sharp turns. On top of this, 35 bridges have been also constructed and renovated along this short distance to prevent flooding.

In constructing this road, preliminary studies aimed at identifying a better route from three different options had to be made first. A route that runs through Shegrni to Durfo administrative area was the first option; another alternative was building a route that passes through Adi-Nifas. But the third alternative that passes from Beleza to Durfo was identified as the most effective.

The construction of the above mentioned road would play a major role in the socio-economic activities of the inhabitants of the area. It is also expected to contribute to the social integration by removing geographic barriers.

Indeed, roads are undeniable sources of socio-economic welfare and will continue playing a dominant role in the enhancement of people’s living standards. With the completion of this road, economic activity has already began to flourish and businessmen have been able to purchase agricultural products directly from the place of production.

Long-term economic growth is closely linked to infrastructure and the lives of the inhabitants of the Durfo area will begin to change for better for they have already become beneficiaries of the new development.

Inhabitants of Durfo administrative area expressed appreciation to the government’s unremitting efforts to improve the people’s living standards.  They explained that they are grateful that they don’t have to tread along a long and winding road to Asmara anymore and can travel to and from their villages anytime they want.