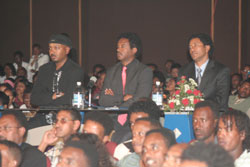 It has been a while since music talent or talent shows in general first appeared as a reality television genre, with their popularity rising every year. Many talented actors, singers, models and other artists found a platform within such talent shows and went on to become some of the brightest starts in their fields. As the first music talent show in Eritrea, Shingrwa has been able to explore the talent pool in the country for two years and in the process provided a platform for several rising stars.

The importance of music in preserving and promoting the culture and identity of any given society is a well recognized fact. In Eritrea, music has not only highlighted the people’s cultural diversity but also shaped and immortalized the different stages of the country’s history. Songs and dances produced by Eritrean artists have been interwoven into the people’s culture, history and traditions.

Shingrwa talent show was launched two years ago with a view to encourage young artists and provide them with an opportunity to explore and make use of their talent. More importantly the talent show was aimed at promoting and shaping the art of music in the country. According to Mr. Barnabas Mebrahtu, music expert and one of the judges in the show, Shingrwa has so far participated more than 1000 contestants, six of which made it to the final stage and claimed their awards.

Shingrwa’s role was not only limited to producing the final winners for it provided exposure and important consultation to all of the participants. Moreover, the comments and tips from the judges has helped set the tone of what a hopeful singer should and should not do to in order to succeed as an artist. The talent show’s entertainment quality is also one of its important features. The show has grown very popular among Eritreans of all ages to the extent that many of the finalists have a broad fan base rooting for their victory. “Just by being on the show the participants are able to familiarize themselves with the public as singers,” Mr. Barnabas said regarding the popularity of the show.

As most professional musicians would agree, the Eritrean music industry had flourished in the 1960s, during which many of the country’s music legends produced some of the favorite songs of all time. However, the music industry could not make further progress due to the unfavorable environment created by colonial regimes. Nonetheless, Eritrean music found a surge within the fields of the armed struggle for liberation. The music produced during those days continue to be a synonym for the different facets of the struggle; hardship, bravery, victory, sacrifice and camaraderie.

Following independence, the music industry did not proceed with the same forcefulness and vivacity it had during the 1960s and the armed struggle for independence period. Although many classic songs were produced

during this time, the energy and passion for the art seemed to have slowed down. On a more positive note, music in the post independence era seems to have a more diverse rage, integrating tunes and beats from differently styles. “Today, there is an ever increasing appearance of choir music and the harmonization of the music being produced is transforming to pentatonic to diatonic,” Mr. Barnabas explained.

Shingrwa, literally meaning “tomorrow’s star” in the Bilen language (one of Eritrea’s nine ethnic groups) sought to revive the country’s music industry by looking for young and talented stars who may have lacked the opportunity to explore their potential. Not that Eritrea lacked stars, but the addition of young and fresh singers would add vigor and perhaps innovation to the music production in the country.

As the Minister of Tourism, Ms. Askalu Menkerios stated in her speech at the final competition of the second season of Shingrwa, music and other cultural activities played a decisive role in turning Eritrean cultural diversity into a blessing rather than a curse as is the case in most parts of the world. Hence, Shingrwa’s role in promoting this very important cultural aspect can not be viewed lightly. And although Shingrwa has yet to find its “tomorrow’s star”, it has in the past two years produced several gifted artists, provided incredible entertainment and set some standard of what aspiring musicians should posses before fully immersing themselves in the art of music.

Sudan, Chad Back on the Right Track