Potable Water Supply for All, One Project at a Time 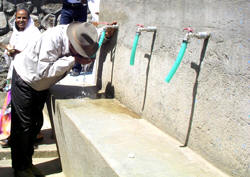 Fetching water was one of the difficult tasks of everyday life for the inhabitants Ma’ereba town, Southern Region. They had to walk for two hours to get to the nearest water source to collect water of unreliable sanitation.
But recently the inhabitants of Ma’ereba seem to have bid farewell to their water problems. They have been able to get an easy access to potable water within their respective localities.

The Ma’ereba potable water project involves 7 water distribution stations that would provide sufficient water supply to the inhabitants and 3 other stations for students around their school environs. The project was implemented at the cost of 6 million Nakfa as part of the government’s endeavors to provide efficient social services in all parts of the country.

According to the project plan, a 49-meters deep well was dug equipped with an electric water pump, distributing water across 4.5kms of pipelines.  In the statement he gave at the inauguration of the project, the Director of Infrastructure Department in the Southern Region, Mr. Rezene fisaha reminded the inhabitants to properly utilize the easily accessible and clean water source that has been provided by the project so that it can be used for generations to come. He also expressed appreciation to all those who participated in completing the project.

Also present at the inauguration ceremony, the Administrator of the Southern Region, Mr. Mustafa Nurhussien said that it is not the amount of money invested in the project that guarantees its durability but rather the way people use and maintain the water source. “The significance of clean and easily accessible water goes beyond the problems mothers faced in fetching water from afar to securing the health of the inhabitants,” Mr. Mustafa added.

In addition to the Ma’ereba project, other similar water projects are also underway in the towns of Debaruwa, Dekemhare, Mai-Dima and Adi- Keih at the combined cost of 200 million Nakfa.

Human beings can use only about 3/10th of all the waters on earth. Such water is found in groundwater aquifers, rivers, and freshwater lakes. And today, the inhabitants of Ma’ereba have become part of this gift of nature.

The Eritrean Spirit of Perseverance: