Assassination of Mariam Bringi Marked the Most Terrible Forms of Killing 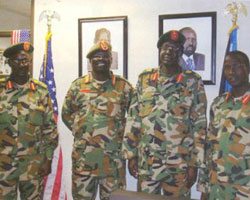 Some parties have warned against violence, urging all parties to rise to the standard of adoption of peaceful means in political action. Maridi Luiji Ajok tells how Bringi disclosed her fears to her and how she used to experience fear and the inconveniences caused to her by SPLM leaders in the region. ho is responsible for Bringi’s assassination? Some hold SPLM responsible for this crime as SPLM was the sole party that has established this practice in evidence of the assassination of former Akaj Dak Gaduet at the hands of GOSS security as confirmed by SPLM faction for Democratic change.

A southern source maintains that the killing of Bringi puts into question the extent of political freedom prevailing in South Sudan, a reason SPLM and its allies have continued to allegedly uphold. The source noted that the assassination case would perhaps plunge the country into political assassinations for resolving political differences.

Moreover, other observers see SPLM responsible for these crimes and for its failure to control its army and groups violating the law as such crimes would not have occurred had the rule of law prevailed.

Ironically, SPLA counters only the political adversaries of SPLM. Jamal AL Saraj, an activist in the SPLM for Democratic Change who was exposed to an assassination attempt in Khartoum believes that such assassination clearly show SPLM’s failure, adding that failure was best enhanced by the assassination of a woman(Bringi).

Meanwhile, a leading Parliamentarian says assassination of women was foreign to South Sudan culture and would take the conditions back to square one.

The phenomenon of corruption of violence in South Sudan has become a chronic disease. This, some observers attribute to administrative failure of SPLM.

Other observers also believe that political assassinations are unfamiliar to Sudanese politics and culture, with Sudanese throughout their history observing honorable political antagonism.

The Director of Democracy and Development Center, Mohammed Abdu stressed the establishment of a proper political climate by refraining from violence. He thinks political assassination could be a serious indication to what may happen in the elections.

Abdu further notes that existence of some treacherous cells could lead to the circle of violence. That being the case, he argues, a political ethical charter should be adopted by political parties to lessen the state of tension. He goes on to warn against political assassinations. Abdu also argues that since the death of SPLM leader, South Sudan tribes began arming themselves.

Other observers including UN were of the opinion that the growing phenomenon of physical liquidation will push South Sudan into unknown future if SPLM remained preoccupied with the internal conflict, without attending to address the impending situation.

Furthermore, SPLA violation of law and targeting of civilians is alarming catastrophe which leads to consequences with SPLA becoming a party to the conflict against GOSS.