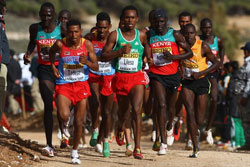 Many people describe cross country championship competitions as the purest form of athletic endeavor where the purest sporting challenges are witnessed. This particular competition is the one that put Eritrea on the global sporting map, months before the country earned its maiden Olympic medal in Athens 2004. Eritrea stood 3rd and climbed on the podium for the first time in the 2004 Brussels World Cross Country Championships laying ground for further achievements. The celebration of this historic event was accompanied by President Issaias Afeworki on their return home, here in Asmara. As the newly world half marathon record holder Zerisenay Tadese misses his favorite cross country racing field for the first time since 2002, a group of junior and senior men athletes have set off to participate in the 38th IAAF World Cross Country Championships 2010.

Senior Men – 12km
Teclemariam Medhin, Samuel Tsegay, Tesfahanes Mesfin, Kidane Tadese, Kiflom Sium and Tewolde Estifanos will line up for Eritrea in senior men 12km competition in the absence of Zerisenay Tadese. This team could seriously be affected in its search for a podium finish without Zerisenay. However, the presence of the rising star Teclemariam Medhin and well focused runner Samuel Tsegay could make a difference.

Teclemariam has matured in the past few years. He was Eritrea’s Olympic racer three years after his introduction to the world of athletics. Ripened by his day to day trainings and competitions, this could be the year for him to stand in the top 3, or at least top 6 rankings.

Teclemariam Medhin’s 9th finish in the 2009 Cross Country Championship held in Amman, Jordan is a clear indication of his growing maturity.

Samuel Tsegay is the other athlete that Eritrea expects to shine in the 2010 World Cross Country Championships. He is one of Eritrea’s well-defined and honed athletes in junior competitions.

His 4th place in IAAF World Junior Championships back in 2006 and his 8th finish both in Fukuoka (2006) and Mombassa (2007) world cross country championships are practical testimonies. As he jumped to senior level, he had a disappointing performance in his first year. Last year, however, he stood 16th in Amman World Cross Country Championships.

Samuel was more than impressive in Birmingham world half marathon championship this year where Zerisenay escalated to a super-hattrick finish, winning for the 4th time consecutively.  Samuel stood 5th in that competition making him an eye-capturing athlete for the 2010 World Cross Country championships this weekend.

Because of the absence of Zerisenay and Kenenisa from world cross country competition for the first time since 2002 and for the second time since 2001 consecutively, IAAF believes that the 2010 World Cross Country Championship edition will mark the end of an era. Free of the domination of these super class duo, many other athletes have now the possibility writing their names. Eritrean athletes like Teclemariam and Samuel have this great chance to individually climb in the list of top athletes.

Eritrea will surely miss all time sporting hero Zerisenay Tadese in World Cross Country Championship competitions. But his absence leaves great responsibility for those who are taking up his place in the championship.

Junior men – 8km
Promising young athletes are expected to open fierce competition at the junior level. Younger brother of Eritrea’s veteran athlete Yonas Kifle, Goitom Kifle, has surprised the team in 2009 in Amman (Jordan) despite participating in the world venue as a novice athlete.  He stood 14th leading the junior Eritean team in World Cross Country Championship. Goitom Kifle is again back to the competition together with Mulue Andom and Nassir Dawud. Teclit Tewoldebrhan and Samson Gebrehanes are the other athletes. Despte lack of international competition, much could be expected from Teclit Tewoldebrhan who has been to his best in local competitions.

Assassination of Mariam Bringi Marked the Most Terrible Forms of Killing