Hidden Treasures Of A Young Nation 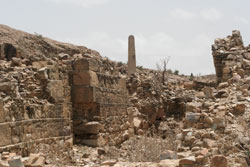 The world is full of amazing sites both natural and man-made, harboring centuries-old history and boasting magnificent beauty. People travel to such places both for entertainment and research. Majority of those places are discovered by archeologists and historians but there are many that are still not known to the world and are waiting to be discovered.

Eritrea, one of the youngest nations of the world has many amazing historical sites waiting to be discovered and explored. The historical sites of Adulis, Kohaito, Metera and the caves in Dahlak

Kebir and Nakfa are some of the historical sites proposed for registry in the UNESCO world heritage. The country’s varying climate and 1200 km coastline in the world’s busiest shipping route make it quite unique. Eritrea also has some archeological findings dating to 2 million years. Following are some of the sites:-

This historical place is located 135Km south from the capital, Asmara, near the town of Senafe in the Southern Region. Metera also known as Belew-Kelew is believed to have been one of the busiest trade zones from around 7th BC to 7th AD. In the 1960’s excavation by French archeologist, Francis Anfrey, three churches and a lamp with a picture of a fox jumping on some other animal were found in this place. The excavation took ten years and before the findings of Francis there was only one 5m long obelisk and some broken ceramics that can be seen. The excavation revealed remnants of residential buildings of ancient princes, kings and religious leaders and their castle with their properties, valuable crosses used by the people living in this area in the 7th – 8th century AD.

The obelisk of Metera is believed to be built in 3rd century AD during the Axumite Kingdom, and has engraved shapes of a crescent and the sun at the top with Ge’ez writing below it. According to the legend in the area, the scripture was written by King Ageza in memory of his brave ancestors.

There is also the village Metera named after one of the country’s highest mountains ‘Mount Metera’, 1km outside the city of Senafe. Here also are other historical sites, namely the monastery and an ancient tree. The tree has 12 branches and the tale in the village is that those twelve branches represent the 12 months of a year and the branches gave fruit accordingly. All the historical sites and findings in Metera indicate the Axumite and Pre-Axumite settlements in the area.

Unfortunately, the historical site of Metera was destroyed by the TPLF troops during the 1998 aggression. The representative of UNESCO in the Horn of Africa, Mr. Mamabu Amini, observed this area and affirmed that the obelisk was damaged deliberately.

Kohaito
This historical site is located 15km east from the town of Adi-Keih at an altitude of around 2,600 meters above sea level. According to many archeologists, the area is one of ancient historical sites in Africa. Kohaito in Saho, one of the ethnic groups in Eritrea, means a place with many stones.

In this historical site there are 12 stone statues, four monarchies and an ancient dam. The dam also known as ‘Safira Dam’ is surrounded by stones, which have Ge’ez writings on them. This dam has been the source of water for the community of Kohaito for a long period of time. There is also Sabean writing in a flat stone found in the middle of

the dam. Other historical sites in the area include the Egyptian tomb, where 70 mummified bodies were discovered in 1905-06. A German Professor, Steven Venik, once said that 31 of those corpses were taken to Germany and 29 of those are still found in German Museums.

There are also cave paintings in a place called Saro, including that of hump-less cow, and other farming equipments. Besides the number of historical sites in this area, it also has been one of the important sites of the Axumite kingdom due to its location half-way from the port city of that time, Adulis, to Axum, the kingdom’s capital. There are also remnants of dirt roads, small residential houses and mansions which indicate the living conditions of the society and the higher class of the society. Similar architectural sites including a dam and stone statues are found in the town of Tokonda’e.