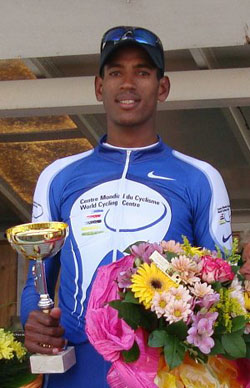 World Cycling Centre (WCC) trainee, the Eritrean Daniel Teklehaimanot, left his mark on the roads of Alsace at the weekend (on Saturday 20th March 2010) when he won the Grand Prix des Carreleurs in France
.

Daniel Teklehaimanot, training for the second year at the WCC in Aigle, Switzerland, easily won the race, completing the last seven laps around Ernolsheim-sur-Bruche solo.
His victory in France is testimony to his rapid progress since joining the WCC at the beginning of 2009. He joined the center’s training program after being spotted by WCC coach Michel Thèze at the African Continental Championships in Morocco at the end of 2008.

For Michel Thèze, the athlete’s progress is more than what could have been hoped for: “I saw him in Morocco and I liked what I saw, the way he rode and his morphology. So we invited him to come and train at the WCC. His progress was rapid and he finished last season with a 6th placing in the Tour de l’Avenir.”

After a brief break during winter in his own country, the 22-year-old rider returned to the WCC in February this year. He had lost some of his physical shape, according to his coach, due to inappropriate winter training. “When he

arrived back at the centre, we were a bit worried about his physical shape. But he got down to work and in just a few weeks he had again made enormous progress. He doesn’t complain, he gets on with it, even when he finds it hard going.”

The Eritrean cyclist is an all-round rider and very strong when the course is tough. However, he lacks certain tactical skills and agility in the peloton when the riders are elbow to elbow.

That experience, he can only find by racing. And the next race took place from the 26th – 28th March at the Troféu Cidade da Guarda-GP Portugal, the first round of the 2010 UCI Under-23 Nations Cup. We will soon find out how Daniel Teklehaimanot and his fellow WCC trainees fared during this particular competition.