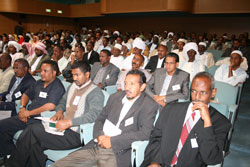 “You live a new life for every new language you speak. If you know only one language, you live only once.” This axiom indicates the significance of being multilingual. In fact, mastering multiple languages makes one a better person. The knowledge of various languages, especially the acquisition of international languages, makes interpersonal communications easier and smoother. Indeed, it has a significance that goes beyond communication; for instance, a multilingual nation has a greater depth of cultural wealth and greater capability to influence people in various disciplines. “Language is tool, language is power, be it an international language or any other language”, said participants of a two-day workshop held at Asmara Palace Hotel from 9-10 April 2010 focusing on the promotion of Arabic language education and developing respective curriculum .

The workshop highlighted that Arabic language was introduced 10,000 years ago with the migration of Arab speaking people to coastal lines of Eritrea especially to the Dahlak Island. It was further extended with the expansion of trade and cultural interactions to the other parts of the country. The language then flourished during the British colonial era with the opening of new schools and the publication of few Arabic magazines.  Attempts were also made to shelve Arabic education during the Ethiopian colonial rule.  In the course of the armed struggle for independence, the practice and expansion of Arabic language gained added momentum. Needless to say, the launching of the Arabic language program broadcasted in the radio, Voice of the Masses, particularly reinforced the development of the language. This development became a good start in the post independence period.

The participants of the workshop discussed various factors that have been stumbling blocks for the progress of Arabic language education. Ms. Nejat Ibrahim, Head of Basic Education in Gash- Barka Region, pointed out that Arabic language education has been overlooked as an add-on course and has not been treated as a major subject. “The time allotted for Arabic session and students’ competence of the language has not been balanced. There has not been a national curriculum that would balance the competence gab among students and potential capabilities of the schools as well.  Thus, Special curriculum ought to be developed with a view to meeting the needs of instructors on teaching Arabic language as a subject,” Ms. Nejat elaborated.

Weather three languages: the mother tongue and two target languages – Arabic and English – could be mastered concurrently in the classroom environment was another point of the discussion. Likewise, Dr. Tekle Gebremussie, Department Head of English in the Eritrea Institute of Technology, agrees with the possibility of studying three languages at a time. But he expressed concerns that learning Arabic language seeks concerted efforts out side the school environment for Arabic is not a syllabic language, there occurs a little difficulty to study the differences in the phoneme and grapheme system of the language.
There are a number of Eritreans who speak Arabic language fluently, but are not able to transfer it to another student for they studied it through informal education. Mr. Tesfay Tekle, Head of Service Rendering Institutions in the Northern Red Sea Region, said that apart from utilizing Arabic language as a means of communication, one could use it to learn the intellectual wealth of the people who use it through their writings and through cultural interactions, and thereby develop economic and diplomatic ties.

The workshop was quite imperative and strategic in charting short- and long-term mechanisms towards upgrading curriculum in close collaboration with concerned partners, said Minister Semere. Also, in the course of the workshop, wide-ranging possible solutions have been explored in a bid to tackle the shortcomings being witnessed in the teaching-learning process.

The Land of Punt is Eritrea (part II)