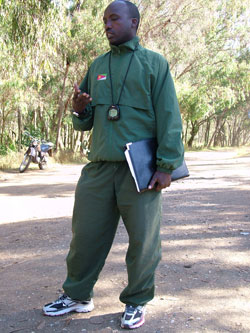 Eritrea has registered outstanding results in a number of international competitions, owning to its talented athletes. The achievement registered in a very short period of time has contributed for the growth of a number of athlete clubs.  Setit Athletics Club is one of the clubs formed to bring forth talented athletes to the world of athletics podium. This club, which was established in 1997, comprises about 39 athletes aging from 14 up to 30 years. Mr. Livingston Abraham has been the coach of Setit Club from 2004 onward. He attended various courses, attained International Athletic Association of Federation (IAAF) Academic diploma and completed level five athletics coach training of international athletics. Following is the interview Mr. Livingstone conducted with Shabait:

Can you briefly tell us about your background?

I was born and grew up in Barentu, Gash-Barka region, in 1973. Following my academic years, I took teaching training course in Asmara Teachers Training Institute. Then I was assigned to work in Gash-Barka region to teach in mother tongue, kunama, while at the same time coaching students. Later on I took various physical education courses including level one athletics course provided by IAAF which began in 2002. Then I took up level five courses in Kenyata University, Kenya majoring in middle-long distance at diploma level.

Is there any particular reason why you chose to major in middle-long distance running?

How would you evaluate Eritrean athletics coaches in the country in general?

Most of them are coaching based on experience and knowledge gained in their years of coaching. Their work is very much admirable; however, experience and education should go hand in hand. These coaches have the potential to nurture excellent athletes who can shine in international athletics arena. Thus, training of coaches should be taken seriously.

How many clubs are there in the country right now?

We have two athletics clubs in Gash Barka region, five clubs in the Central region, one in the Southern region as well as in Defense force including Denden club. Speaking of national teams, the athletes are selected based on their performance on national competitions held in preparation of international games.

Is there any outstanding victory achieved by Setit club, as the club is one of the biggest national clubs in the country?

We always stood in the top 10 ranks in all national competitions. We have scored impressive achievements in a number of international games. One of Club Setit’s athletes, Hais Weldu has been able to join Olympic competition in middle-distance in 2008. Athlete Nazret Woldu was able to gain two gold medals in East African Junior Women championship in 2008, in 800 Km and 1,500km respectively.  Chuchu Giorgio, another member of Setit, was nominated as 6th best runner at the World Youth championship in middle distance held in 2009.

In how many international games have you participated as a coach?

How do you assess female participation in athletics in Eritrea?

As far as I have observed I believe they have tremendous potential. Nevertheless, we need to create viable ground that could encourage them to actively take part not only in running but in other sport fields as well. One of the methods we are using to support female athletes is that we bring them to Asmara while they are still young so that they can easily adapt to high altitude areas. As a result, we have been able to nurture best female athletes.

What is your opinion of Eritrea’s position in the world of Athletics?

We always rank at top 10 levels in men’s long and middle marathon competitions at global level. This indicates that we have potential in long distance running.

Any new developments in Setit club this year?

A track field was recently put in place in Asmara Stadium which is a big relief for us since our athletes were facing difficulties in their performance due to lack of track fields  in number of competitions.

Athletics is one of the kinds of sport in which Eritrea could register impressive achievements relatively easily when compared to other kinds of sports. As we have witnessed in the past also many members of this club and others have shined Eritrea’s name in international games. Therefore, we need to invest in this sport to fully harness the potential of our athletes.

Those Who Sow More Will Reap More