Allegations that there exist foreign military camps in Eritrea are totally baseless: The Gulf News 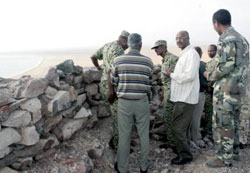 In an article it published under the title “Eritrea: In pursuit of the truth,”  the newspaper with wide circulation in the Middle East indicated that its correspondent was given unlimited opportunity to  visit different parts of Eritrea, including military facilities. It elaborated that the allegations made by western media outlets which were also echoed by some Middle East media organs contain no element of truth whatsoever.

The Gulf News reporter asserted: “We could not see any Iranian soldiers. There were also not any sophisticated weapons or latest technological devices pointing to the presence of any troops from Iran or any other foreign countries in these camps contrary to the allegations made by the Western media.”

The newspaper further explained that its correspondent conducted a tour to Sawa, Kiloma, Assab, Harena, Ras-Dumera, Haleb Island, Ras Darma, the Dahlak Islands, Gash-Barka and other places. The correspondent explained that it could not witness any foreign military base in Eritrea, be it Israeli, Iranian or any other country.

In this respect, the Gulf News correspondent asserted that the report published on 2 April 2009 by the Israeli Maariv daily claiming that ‘Iran has already finished building a naval base at a desert area near the Eritrean port of Assab’ is but a totally baseless allegation.

Also in the course of a tour in connection with the claim that Eritrea is ‘training opposition forces from neighboring countries’, the correspondent team visited sites alleged to be camps, and found out that there exist no evidence at all attesting to this. The Gulf News  went on to indicate that its correspondent toured both by vehicle and on foot to Sawa claimed to be ‘training center of opposition forces of neighboring countries,’ but it did not witness any evidence of the presence of such forces. On the contrary, its correspondent found Sawa to be center of human resource development in which thousands of Eritrean students complete their secondary education and receive various types of vocational training, the paper elucidated.

It went on write: “During the tour, both by vehicle and on foot lasting for nearly two hours, we did not see any evidence or indication of the presence of any foreign forces, be it Somalis, Ethiopians or Iranians.”

The Gulf News further pointed out that its correspondent climbed the Ras Dumera mountain on Eritrean-Djiboutian border and confirmed that there exists no confrontation between the armies  of the two countries. In this connection, the paper underscored that the baseless anti-Eritrea allegations emanate from the country’s strategic importance.

The paper cited that in a reply he gave to questions whether there exists Israeli or Iranian military presence in Eritrea, President Isaias Afwerki repeatedly underscored that any one can visit and personally witness the fact on the ground. Accordingly, Gulf News noted that it sent a team which conducted a tour of different parts of Eritrea through land, sea and air, and it did not come across any Israeli or Iranian military base, not even Eritrean armed forces in
the so-called oil refinery facility where Iranian presence is alleged.