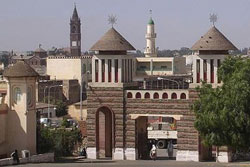 In a program it broadcasted yesterday, Aljazeera TV highlighted that Eritrea is exemplary for peaceful co-existence of multiculturalism and religious faiths, besides being museum of classic Art deco.

Asmara, 22 April 2010 – In a program it broadcasted yesterday, Aljazeera TV highlighted that Eritrea is exemplary for peaceful co-existence of multiculturalism and religious faiths, besides being museum of classic Art deco.

The program transmitted under the theme “Eritrea: Behind The Crises” in which historians took part highlighted the path and challenges Eritrea traversed to achieve independence and safeguard sovereignty. It explained that thanks to the heavy sacrifice it paid, the country is enjoying peace and stability. Unlike other countries, the habit of strolling along the streets of Asmara City in the evening hours amply attests to the prevailing peace and stability, the program elucidated.

It further noted that the value of co-existence and mutual respect is deeply rooted in the Eritrean society that continued for centuries and reinforced through joint struggle and martyrdom. In this respect, Aljazeera said that Eritrea sets a good example for demonstrating that pluralism is a big asset. Indicating that the Eritrean Revolution played a major role in preserving and nurturing such a value, the program stated that the peace and development attained in the country following the war is the outcome of such commitment.

Moreover, the program noted that the Eritrean People’s Liberation Front (EPLF) managed to nurture a civilized society through the principle of self-reliance with active popular participation. And as such, the Front has succeeded in being cited as one of the “best liberation movements in the world,” Aljazeera added.

The program went on to note that on top of the existing rich natural resources, Eritrea possesses classic Art deco that could enable it assume renown at the global level. Asmara’s architectural charm in particular and the classic steam engine locomotive which was reactivated on the basis of internal resource constitute major tourism destination assets that could provide impetus to the country’s economy.

The program further indicated that the Eritrean government is making substantial investment mainly in education and health, and that these services are being equitably expanded even in remote areas, which in turn ensures the country’s bright future.