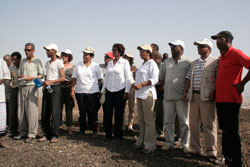 The Minister of Tourism, Ms. Askalu Menkorios, underscored that coordinated effort on the part of all concerned bodies is decisive for harnessing the nation’s tourism resources.

Asmara, 27 April 2010 – The Minister of Tourism, Ms. Askalu Menkorios, underscored that coordinated effort on the part of all concerned bodies is decisive for harnessing the nation’s tourism resources. She made the remarks following a tour to tourism sites, particularly in the Northern Red Sea region at the head of group of experts from different ministries and organizations, which was conducted in two phases.

In an interview with ERINA, the Minister pointed out that the Tourism Ministry is conducting regular tours aimed at harnessing natural tourism resources for the benefit of the people and the country.  The ancient historical and natural tourism potentials of the Northern Red Sea region, coupled with unpolluted sea, historical trenches, over one thousand different kinds of fish and 360 islands constitute additional resources.

The Administrator of the Northern Red Sea region, Ms. Tsigereda
Woldegergis, on her part indicated that the natural tourism resources of the region have been properly studied, and the recent tour of experts was significant as regards stepping up more research.

Pointing out that the group of experts visited eight sub-zones through air, sea and land, Ms. Tsigereda said that the coordination of administrative bodies and other partners, in addition to the role of the local inhabitants is vital for more gratifying outcome in adequately harnessing the country’s tourism resources.

The tour headed by Ms. Askalu included museum of the region, Afabet, Gadm Halib, Kubkub, Ashrom, historical trenches, Nacfa, Rora Bakla, the Dahlak Islands, Wengebo, Abdur and others.
The participants of the tour comprise individuals from the ministries of foreign affairs, information and tourism, the National Museum, PFDJ research and documentation bureau, PFDJ cultural affairs bureau, Eritrean Police and the College of Arts and Science.