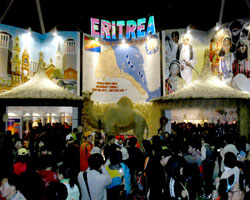 Eritrea is participating in the Shanghai World Expo 2010 held under the theme “Better City Better Life”.

At the Expo currently underway in the Chinese city of Shanghai    which opened on April 25 where more than 241 countries, organizations and associations are taking part, Eritrea has staged an exhibition highlighting Asmara’s assets aimed at familiarizing visitors.

Eritrea Pavilion displays the philosophy of urban development in Eritrea, along with social coherence based on cultural and religious harmony, urban development based on social justice, environmentally sustainable urban growth, architectural heritage and tourism.

During the opening ceremony in which 70,000 visitors participated, Eritrea Pavilion hosted a large number of visitors who greatly admired the display, according to reports.

Sibrit cultural troupe is scheduled to present performance at the Eritrea Pavilion that is jointly organized by various Government and PFDJ institutions.

Reports also indicated that the 19th anniversary of Eritrean Independence Day on May 24 would be colorfully celebrated in the course of Shanghai World Expo 2010.