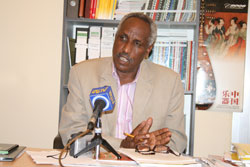 He told ERINA that the Association is working to assist war-disable veterans to become productive and self-supporting, create work opportunities and provide health care service, among others.

Mr. Gebrebirhan further explained that the ENWVA has rehabilitated about 546 citizens in groups through opening 68 small and large-scale business ventures, including mills, metal and wood works, fuel stations and the like at a total cost of 43 million Nakfa. In addition, the Association has managed to rehabilitate 425 war-disabled veterans through extending interest-free loan.

Moreover, it formed a micro-credit scheme in 2009 which practice has borne effective outcome in Gash-Barka, Southern, Anseba, and Southern Red Sea regions respectively, he elaborated. In this respect, about 300 war-disabled veterans have already become beneficiaries of the scheme.

Reports further indicated that the ENWVA has provided various training courses such as driving, computer application, management and construction to about 4,500 members. In addition, the branches of the Association in various parts of the country have implemented projects worth about 8 million Nakfa, Mr. Gebrebirhan added.

Ethiopia: At A Decisive Stage Between Its People And The TPLF(IX)