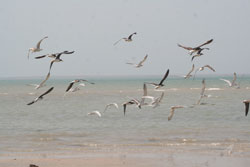 The people in the region value the presence of guests and as such accorded the visiting crew with a warm welcome wherever they went. Not only was that, the food they served which reflected the rich fish resource of the red sea in all the places we visited was exquisite. We couldn’t stop admiring the people wherever we went; it was like a cooking competition amongst the inhabitants. Every meal served included variety of fish and cuisine.

Zula is another historical place in the region just a couple of kilometers from the ancient port city of Adulis. Like the other parts of the region, a herd of ostriches on both sides of the road accompanied the convoy until they reached the outskirts of the town located on the red sea coast. Upon arrival, the inhabitants of the area received us with face melting drumbeats of the predominant settlers of the Town; the Tigre, Saho and Rashaida ethnic groups. To our surprise, each ethnic group has its own style of beats but the sound of all didn’t interfere. On the other hand, they made a perfect harmony that pleased the ears of the entire group.

After almost two hours of lunch rest and breathtaking sea breeze from the clean Red Sea shore, the tourism group made its way for yet another adventure to witness in the port city of Massawa, the region’s capital. But before that, I forgot to mention the natural hot springs on the way to Erafaile. Many people consider it a place where nature heals nerve problems. All you need is a blanket to wrap your self with and sit over those holes scattered abundantly all the way and receive natural steam from beneath.

The journey to Massawa was very pleasing. The landscape on the left side of the road and the seashore on the right is something you wouldn’t want to take a turn from. On every stop, experts from different ministries gave briefings to the group as regards to the geographic analysis of the landscape, the coverage of marine resources and biodiversity, as well as environmental perspective as to preservation of the resources.

After almost two and half-hours, the motorcade reached the port city of Massawa, an old and modern city. The city as a whole is a blend of Arabic architecture that mostly is related with the Turks and Egyptians as well as some monumental Italian touches. The Architectural splendor of the city by it self needs an entire story to tell, but the main purpose of the visit then was to see “the could-be” oldest mosque in Africa.

It is called the Sahaba, which means the followers of Mohammed. It was built at around 615 A.D, when the first fleeing companions of Mohammed reached on this side of the Red Sea. It is said that the mosque could have been constructed after the followers Mohammed seek sanctuary in a land across the Red Sea, which according to various historical evidences could be Massawa. As a matter of fact, various other evidences that could couple this evidence are abundant in various parts of the region.

Towards the east of Massawa somewhere around five kilometers by sea is an Island called Sheik Seid, which is commonly known as the green Island. Sheik Seid is a name, which signifies the existence of an ancient mosque in the small Island, while the Green Island could be related with the green view the island provides from afar.

According to marine resources experts, the island is a haven for various marine species that includes a place of hatching for sea turtles. Furthermore, the location of the island controls the natural flyway of various bird species from Europe to Africa and the other way round.

Apart from the historical and architectural wonders Massawa is endowed with, the port city is also a land of bravery and a gateway for total liberation of Eritrea. Many battles were fought there and miracles were made by the valiant liberation fighters, but the story of resilience in Massawa will be covered in our next edition.