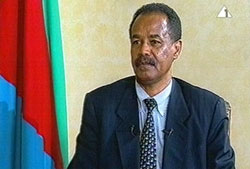 President Isaias Afwerki said that agreement has been reached to take practical action for enhancing the historical and geographical bonds between Eritrea and Egypt in the domains of trade, industry, agriculture, investment and other sectors.

Asmara, 6 May 2010 – President Isaias Afwerki said that agreement has been reached to take practical action for enhancing the historical and geographical bonds between Eritrea and Egypt in the domains of trade, industry, agriculture, investment and other sectors. The President also pointed out that the talks he held with President Mohammed Hosni Mubarak and other Egyptian government officials focused on this stance. President Isaias made the disclosure in an interview he conducted with Egyptian Television yesterday.

The interview focused on Eritrean-Egyptian ties, Eritrea’s relations with Arab countries, security in the Red Sea and the role of adjacent countries, the issue of the Nile River and ways of resolving it, the Sudanese and Somali situation and the problem external interference is creating, and Eritrean-Yemeni relations, as well as the Eritrean-Ethiopian issue. In the interview, President Isaias underlined the need for dynamic mechanism so that Eritrean-Egyptian ties could take firm root, in addition to making optimum use of the prevailing opportunities in trade and economic relations.

Replying to a question as regards Eritrea’s role and standpoint in resolving the problem of sharing Nile waters, the President indicated that in the first place the methodology employed by the Nile Littoral States not only aggravates the situation but also creates tension.  As such, he emphasized that the Nile River should be used for common welfare and cooperation, and not for mere political consumption. President Isaias went on to elucidate that instead of talking about the wrong agreements and regulations, resort should be made to conducting research on ways and means of utilizing the existing resources for common advantage. In this regard, he explained that Eritrea’s modest role emanates from this stance, and that the nation has been making its position on the matter clear.

On the Somali issue, the President pointed out that the country has become victim of external interference, and that this remains the main problem. In this connection, he cited that some neighboring countries in particular not only committed open interference but also worked for the disintegration of Somalia under the lame excuse that if a central government is established in Somalia, it ‘poses a threat to them’. President Isaias further underscored that besides removing such a dangerous scenario to both Somalia and the entire region, an inclusive political process should be created in which all Somali political forces take part, and that this is the sole alternative.

As regards Eritrean-Yemeni relations, he said that the relations are not only deep and historical but also strategic as well as people-based. Stating that allegations claiming that Eritrea ‘extends support to Huthis is baseless, President Isaias explained that such unfounded utterances emanate from those parties keen on undermining the development of solid Eritrean-Yemeni ties.  He further asserted that Eritrea attaches top importance to the prevalence of peace, stability and unity of Yemen, and that such a state of affairs is equally in its interest.

In a reply he gave to a question on the possibility of normalizing Eritrean-Ethiopian relations, the President underlined that the border issue has reached legal conclusion in accordance with the final and binding EEBC ruling adopted on the basis of the agreement signed by the two countries. However, the situation still remains unsettled due to Ethiopia’s failure to implement the agreement it had signed, as well as the disregard on the part of the international community to live up to its responsibility, he added. President Isaias went on to say that “as the interest of both the people of Eritrea and Ethiopia is anchored on peace and stability, our relations would eventually be normalized.”