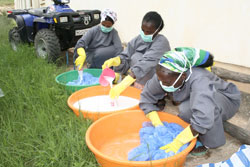 The prevalence of wide range malaria epidemic areas has been the cause for increased number of malaria infected people. In the case of Eritrea, though highlands situated in the elevation of 1500 meters above the sea level are mostly free of malaria, its occurrence is however, seasonal in western lowlands and coastal plains and particularly in Gash-Barka Region. The intensity for the transmission of malaria, therefore, varies in accordance to rainfall distribution and humidity of the respected area.

Southern Red Sea and Central Regions have low prevalence of malaria due to unfavorable conditions to mosquito breading. On the contrary, agricultural activities, traditional mining, and construction of water reservoirs’ have been the leading causes for the prevalence of malaria in the western lowlands for all of these activities create favorable conditions for mosquito breading.

Accordingly, department of disease prevention and control at the Ministry of Health has been making concerted efforts to take every possible measure to totally prevent the occurrence and transmissions of malaria.

Besides the concerted efforts of the Ministry of Health and concerned authorities, the leading factor that contributed for the reduction of malaria in Eritrea is that the result of the raised awareness among the general population on the prevention of the epidemic.

has since long realized malaria as a major health problem of the country and issued national malaria control policy.

Established in 1995, the National Malaria Control Program (NMCP) has been taking due actions to combat and eradicate malaria. Since then, the program was integrated within the general health services of the country and also extended its branch offices at national, zonal and sub zonal, and at community level as well.

The burden malaria infection could bring about on the lives of people living in malaria prone areas and to the overall human development cannot be underestimated. Therefore, malaria needs to be tackled and prevented before it is widely transmitted to the general public.

Such a large-scale malaria control program can not be achieved in a short span of time. The Ministry of Health made plans for a stage by stage control mechanism. The NMCP has achieved commendable successes during the implementation Roll Back Malaria (RBM) initiative that was endorsed in 1998 to be carried out through five-year strategic plans. The first plan extended from 1999 to 2004 and the second 2005 to 2009. At the moment the department is looking a head to achieve more in the implementation of the third five-year strategic RBM program.

Different factors have contributed for such achievement.  Prevention mechanism such as: distribution of impregnated mosquito nets, eliminating and treating mosquito breading sites and keeping the environment tidy are among the many actions taken in the malaria control and prevention activities.

Eritrea has often been cited as one of the exemplary countries that are on the right track of securing child and maternal health. Though the malaria control program is inclusive of all age groups, it also gives much priority to avoiding any complication that could occur in pregnant women and children under-five years of age.

Malaria could cause sever anemic problems in pregnant women and many infants may also be born anemic. Bearing in mind the afore-mentioned conditions, the program as part and parcel of the overall malaria control programs gives priority to the vulnerable cases that would cause poor public health conditions.

As a base line treatment for malaria both in health stations and at community level the ministry adopted a combination therapy of anti-malaria drugs. Treating with Quinine is, however, reserved for severe malaria.

In Eritrea, Malaria is on the verge of elimination. The set out plan for the next five years that would focus on the epidemic areas of the country is also expected to yield a substantial outcome on the prevention and control of malaria transmission.

Horn of Africa, Victim of Narrow Politics (Part I)