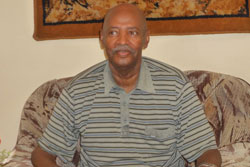 In an interview he conducted on the occasion of the 19th Independence Anniversary, the Secretary of the PFDJ, Mr. Al-Amin Mohammed Seid stated that Eritrea has secured a bright future by nurturing patriotic and educated youth.

Asmara, 11 May 2010- In an interview he conducted on the occasion of the 19th Independence Anniversary, the Secretary of the PFDJ, Mr. Al-Amin Mohammed Seid stated that Eritrea has secured a bright future by nurturing patriotic and educated youth.

Indicating that the government’s extensive investment on the young generation emanates from the vision of creating a self-sustaining and proud nation, Mr. Al-Amin said that the committed efforts of the youth inside and outside the country to realize national development goals and rebuff all manners of ploys is a clear testimony to the practicality of the Eritrean government’s vision.

Mr. Al-Amin went on to underline that the Eritrean people are fully capable of overcoming conspiracies and unjust resolutions and expressed conviction that this year will indeed be a time for marching towards a bright future, just as President Isaias Afwerki had indicated.

Pointing out that Eritrea’s coveted geo-political location is further highlighted by its history of struggle and common sacrifice, Mr. Al-Amin explained that the Eritrean youth’s commitment to safeguard national sovereignty and realize national development goals is indicative of the country’s bright future.

Stating that the EPLF had been able to overcome international conspiracies and achieve national independence due to complete popular support, Mr. Al-Amin said that the Front is now working miracles in rebuilding the country armed with the same unwavering popular support and an independent political path. And the vivid successes being achieved in different parts of the country are a clear testimony to the afore-mentioned fact, he added.

Speaking about regional issues, the PFDJ Secretary said that since Eritrea’s peace and stability is directly affected by the stability of the entire Horn region, it has been playing it due role in this regard and will continue to do so.

Gash Barka : Displaced Nationals Rehabilitated With An Expenditure Of Over 324 Million Nakfa