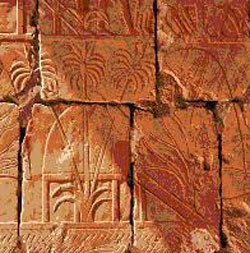 Share
When the Nine Saints came from Syria to preach the Christian faith in Eritrea in the 5th century, they came with a large host of religious men who dedicated their lives to the attainment of salvation through serving God. In Tigrigna, these holy men are called “Tsadqanat” and the story of their lives and the hardships that they endured is recorded in parchments called “Gedle Tsadqanat”, which is roughly translated as the   “sufferings of the Holy Men”.

While the Nine Saints assumed the spiritual leadership, the Tsadqanat were responsible for the regular services given to the population, leading prayer as well as engaging in catechism.
Most of the Tsadqanat came from either Egypt or Syria, while some came from other parts of the Byzantine Empire which stretched across Europe and Asia.

The Tsadqanat were among the first Christians who followed the monastic order established by Saint Antonios (250-355 AD). This means that the Tsadqanat vowed celibacy and worshipped God while leading a life of austerity and frugality. The chronicles of their lives indicate the Tsadqanat wore nothing but animal hides and shunned proper housing to dwell in mountain caves and gorges.

Some of those holy men dispersed to the areas around Mount Emba Soira; others were to Metera and Bareknaha; all these places are found in the Southern Region of Eritrea.

The Tsadqanat who went to Bareknaha are said to have numbered around 150. There, these holy men professed and preached their religion by building a quadratic building in the Basilical style that was being used in Syria and Constantinople in those days.

Nowadays, the church at Bareknaha has benefited from a larger extension built in the same fashion that was used 1,500 years ago. Within the church, a painting of Christ’s crucifixion hangs on the wall; the painting is purported to be the first which portrays the crucifixion in Eritrea.

Also found there are many valuable artifacts made of bronze, which show incredible artisan skill. These bronze bowls, plates and goblets are believed to have been brought from Syria and Byzantium by the Tsadqanat to serve as sacraments for performing the Holy Communion and Baptism.

There are also believed to have existed many artifacts made of gold and other previous stones; however, they were looted by the various colonizers who came to Eritrea.
After preaching Christianity for more than 30 years, the Tsadqanat began facing persecution from those who were averse to the religion, which was fairly new and foreign at that time.

Sensing that their end was near, the Tsadqanat resolved that since they all set off on their holy mission together leaving their homelands behind, then they should all leave this world together.
Thus according to old parchments, the Tsadqanat togethers said, “Sleep, for we shall sleep; let us all sleep”.

And with that they all died, in what may be an amazing miracle of divinity or perhaps mass suicide. To this day, the mummies of the dead saints are preserved in Bareknaha, but how they died and who mummified them remains a mystery. For Christians in Eritrea, the Tsadqanat are the first martyrs who gave their lives in the service of the Lord.