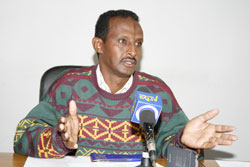 Of the all the days in the same month, 24 May stands out in the Eritrean history. It is the day that pulled away the dark clouds of colonialism to let it in the bright rays of freedom. To celebrate this most auspicious day, every year different cultural performances are held in different parts of the country that run for weeks. The primary coordinator of these events is the Holidays Coordinating Committee. Shabait conducted a brief interview with the Chairman of the Committee, Mr. Gideon Fissehaye about what to expect for this year’s celebrations. Excerpts fellow:

Let’s start with what kind of events we can expect in this year’s independence celebrations?

As has become customary, artistic performances featuring new songs and different cultural shows would be staged in Bahti-Meskerem square and Odeon cinema. Besides this, different activities that include painting children’s faces, one-man band show, karaoke- and other shows that would stay for about 10 days would be staged at different places of the Liberation Avenue. On technical aspect, decorating the main streets of the capital with lamps of different colors has been completed. To add color to the event, a race will open for all age groups starting from 15th of May.  The contest would begin from different starting points, all making their final destination at Bahti-Meskerem square.

Elementary, junior, and secondary schools throughout the country, would be represented through three selected paintings in an exhibition that wound be displayed outside the Ministry of Education building.
Moreover, the annual carnival that is gaining momentum every year is among the major programs in which 13 administrative areas within the capital and 45 institutions would participate.  There is also the communal celebration within respective districts. The celebrations that had been confined in administrative areas would be, in this year’s program expanded, to communities in all localities. What is more is that schools would make artistic and cultural preparations to vividly celebrate the event within their respective school premises.

As part of the popular participation, every business firm or organization would be encouraged to vibrantly decorate its premises.
On 23rd May, people will be entertained with live music and song performances that would continue till the launch of fireworks at 12:00 pm.  Extensive preparations have also been made to uniquely mark the event with ever-exuberant students’ aerobics movements, songs, musical dramas and military parades.

What can you tell us about the participation of the youth in the festivities?

There is high engagement of youths in all aspects of the festivities. Thousands of students have been actively involved in different shows. Their participation in artistic activities has been vivid. We are now trying to encourage secondary, junior, and elementary students to express their views through their talents.  The youth are the major participants of varied shows like one-man band, special talent presentations, karaoke, and the carnival.

How do you describe the coordination among different administrative areas, organizations, the ministry of education, and other institutions?

How would you describe the people’s participation in the Independence Anniversary celebration?

Popular participation is highly imperative to the vividness of the celebratory events. People’s eagerness to participate in all cultural shows held each year at Bahti-Meskerem square and other places is highly impressive. The Carnival show and people’s group dancing during the independence celebrations has become one of the important aspects of the festivities.

Tokombia Bridge: A New Chapter in the Construction Of Bridges