Tokombia Bridge: A New Chapter in the Construction Of Bridges 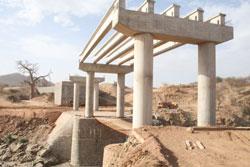 Eritrea, the youngest nation in the Horn of Africa is undergoing extensive development endeavors. Constructing new roads, dams, health centers, schools, introducing new irrigation system and expanding social services, include some of the development activities. In all the aforementioned activities transportation, in particular is an essential factor that facilitates other endeavors. As a result priority is given to connecting all parts of the country especially the remote areas of the country through a network of roads. Gash Barka is a region where majority of the agricultural product of the country is produced and is also where the country’s large rivers, Gash and Barka pass through. Transportation is essential in distributing the agricultural products of the region. Many roads have been constructed connecting towns, villages and cities of the region but since the region has the country’s two largest rivers, construction of bridges becomes necessary. In the year 2005, the bridges of Adi Keshi, Grasha of Haikota and Alebu were constructed and have played a crucial role in transportation.

As part of the bridge construction program, this year a bridge was built over the country’s largest river, River Gash.  Though the landscape of the area and the river’s width make the construction of this new bridge exceptionally difficult, Gedem and Debaisima construction companies strove hard to make this dream come true. The first step was clearing the water underneath where 12 motors were used and then laying the foundation which was 23 meters beneath the surface.

In laying the foundation there were some unique features of the area as a result the companies’ reform many of the techniques and methods that they were using before, in explaining those methods. Architect Weldu Ande said that since the foundation of the Tokombia Bridge is made up of stones, the stones were drilled 6 meters deep and then filled with concrete. “Once the concrete is poured, the foundation has to be finished quickly because if the concrete dried it will be dangerous for strength of the bridge,” he added.

One of the towns that are going to benefit from this newly constructed bridge is the semi-urban Tokombia, which is located along the River Gash and is among the trading centers of the region. Before the construction of this bridge the town had been isolated from the rest of the region especially during rain seasons. Previously the inhabitants of the region used the traditional century-old bridge constructed during the Italian colonial era later in 2007, this old bridge was destroyed, which left this town isolated from the region but now with the construction of the bridge such troubles will be over.

The Tokombia Bridge is part of the various endeavors of the government to develop remote areas and will play a crucial role in enhancing the living standard of the inhabitants. This bridge is opening a new chapter not only in the lives of the inhabitants but in the construction of bridges around the country as well.