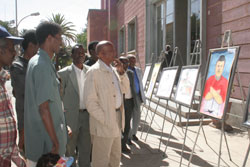 The 19th independence anniversary celebrations here in the capital are continuing with patriotic zeal.

Asmara, 16 May 2010 – The 19th independence anniversary celebrations here in the capital are continuing with patriotic zeal.

There celebrations that began yesterday also continued today with much fervor featuring a number of activities.

In the morning hours today, the Minister of Education, Mr. Semere Russom, opened a painting exhibition prepared by students. The exhibition highlights the Eritrean people’s historic struggle, resolute rebuff, the prevailing development programs and culture of the people as well as various slogans featuring the current objective situation.  Minister Semere expressed admiration to the artistic creativity of the students.

Moreover, different programs which include chess competition, sketching and others were featured on the Liberation Avenue in the afternoon hours. Likewise, new songs and musical drams were staged at Bahti Meskerem square for the second day.

Mr. Birhane Abraha and Ms. Sofia Jamie from the spectators pointed out that this year’s independence anniversary is being marked in unique situation as both the people of Eritrea and government are reinforcing their efforts to resolutely rebuff all acts of conspiracy and march on national development path towards achieving the desired goal. They called on the general public at large to ensure their readiness for committed work in view of the fact that work is solution for every eventually.

Barentu Registered Impressive Progress Over The Past 19 Years