2nd half of 2010 work program aims at making the year a turning point in the development drive: President Isaias 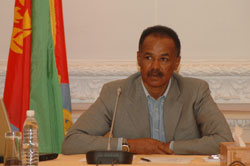 President Isaias Afwerki said that the 2nd half of 2010 work program aims at making the year a turning point in the development drive through rebuffing challenges and reinforcing development endeavors.

Asmara, 17 May 2010 – President Isaias Afwerki said that the 2nd half of 2010 work program aims at making the year a turning point in the development drive through rebuffing challenges and reinforcing development endeavors.

The President made the statement in a working paper he presented at the Ministerial Cabinet Meeting at the Denden  Hall here in the capital. Outlining the development projects set for implementation in all sectors along with the required budget during the 2nd half of 2010 and beyond, he pointed out that the major portion of the national budget is geared towards ensuring food supply and other strategic consumer items and services. President Isaias further underscored that the implementation of development programs with substantial budgetary allocation would continue with added vigor on a priority basis. In this connection, the President made reference to import substitution measures through raising domestic productivity, as part of efforts to control inflation and minimizing living standard constraints and ensuring economic stability.

Stating that various acts of external conspiracy were weaved with a view to preventing the flow of foreign currency, he outlined the fiscal measures that need to be taken to combat such a ploy. President Isaias further highlighted the need to properly identify the factors causing burden in the people’s standard of living, and thus take corrective measures. Parallel with this, the President stated that social security programs would be implemented that mainly focus on members of the Defense Force and other deserving nationals, in addition to charting long-term programs for the benefit of the entire citizenry.

As regards enhancing development campaign, he explained that continued attention would be given to the task of putting in place vital agricultural infrastructure facilities, extend loan to private sector so as to encourage investment. Moreover, the necessary study would be undertaken towards promoting partnership with foreign companies in the fisheries sector, besides providing support of vital production and related facilities aimed at boosting fisheries products both for the local and foreign market.

As regards construction projects, the President indicated that machinery potential in this sector has registered 40% growth in 2010 thanks to the substantial government expenditure to this end.  The required budget has also been allocated to ensure the supply of fuel and construction materials, he added. As far as meeting the challenge of residential housing is concerned,  President Isaias noted that EDF members are the ones that deserve top priority commensurate with their dedicated services to the nation. In connection with energy and mines  sector, he pointed out that efforts are being made to expand electricity supply, while the required budget has been allocated for mining activities in different areas of the country already underway and those envisaged for the future.

Regarding expansion of public transport services, the President stated that there are plans to increase the number of buses to be deployed in the rural and urban areas. Furthermore, the distribution of fiber plastic optics would be enhanced, he added.

In the domains of tourism, President Isaias said that measures would be taken to reinforce large and small-scale investment ventures, while all possible encouragement would be given in the form of foreign currency to the main government and private-owned industrial plants in the 2nd half of 2010 in the trade and industrial sectors so as to enable them operate in full capacity. Fish export is also one of main income-generating activities that deserve due encouragement, he elaborated.

The President also shed light on the initiatives taken and achievements registered in the expansion of health and educational services across the  nation. In this regard, he outlined the programs mapped out to further reinforce services in both domains – all within the Government’s persistent efforts to promote social justice.

In connection with the task of strengthening media activities, President Isaias gave detailed explanation, particularly that of upgrading radio broadcast coverage along with other programs. Furthermore, he reiterated that sufficient budget has been allocated to all the envisaged development action programs.

The President also gave extensive briefings as regards the objective situation at the regional and global level, as well as political and diplomatic developments witnessed over the past six months and future prospects.

The Ministerial Cabinet meeting conducted extensive deliberations sector by sector as regards the envisaged programs and those under implementation. In the afternoon hours, the meeting conducted discussion on the programs charted by the ministries of national development, agriculture, marine resources and public works. The meeting of the Cabinet of Ministers would continue tomorrow.