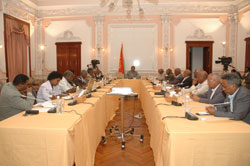 The two-day meeting of the Eritrean Cabinet of Ministers at the Denden Hall here in the capital concluded today adopting significant resolutions and work directives.

Asmara, 18 May 2010 – The two-day meeting of the Eritrean Cabinet of Ministers at the Denden Hall here in the capital concluded today adopting significant resolutions and work directives.

In its yesterday’s session, the meeting held deliberations on the working paper presented by President Isaias Afwerki regarding national development programs for the 2nd half of 2010 and beyond, as well as political and diplomatic developments. Also in the afternoon session of the same day, the meeting took note of the tasks being undertaken concerning the collection of detailed data and streamlining information system that would made due contribution in reinforcing development programs. It further reached understanding that all the ministries and administrations should effectively accomplish their reorganization and restructuring programs.

Moreover, the meeting reviewed the action plans in the agricultural sector and the preparations being made for this year’s rainy season and 2011. It conducted extensive deliberations on agricultural research and study programs aimed at raising productivity, enhancing soil and water conservation involving community participation, promoting forestation and animal resources development, among others.

In the domain of marine resource, the meeting took  note of the marine products harnessed over past six months, besides conducting discussion on the steps that need to be taken towards creating conducive ground for the operation of various facilities such as ice production plant, fish storage and processing facility, as well as cold transportation devices.

The Ministerial Cabinet Meeting went on to hold deliberations on the programs dealing with the construction of new roads and renovation of existing ones. Also featuring in the discussion were the construction of water diversion schemes, putting in place agricultural facilities and the building of residential housing complexes. It also heard report on the preparation of master plans for urban centers and engineering regulatory plans.

As regards the energy and mines sector, the meeting reviewed the progress made in exploration and mining activities being undertaken in different parts of the country, in addition to future action plans. Furthermore, it conducted discussion on the study undertaken focusing on developing alternative source of energy, especially geothermal energy, streamlining the handling and utilization of fuel and gas and expanding electricity supply.

During discussion on transport and communications, the Ministerial Cabinet Meeting took  note of action plans aimed at developing land, sea and air transport services, as well as upgrading communication networks, among others.

The meeting also held deliberations regarding water and environment issues. In this respect, it reviewed the accomplishment registered in land allotment for agriculture and other purposes, construction of water storage and infrastructure facilities, combating environmental degradation and deforestation, as well as preserving biodiversity and wildlife resources.  The meeting further gave work directives on reinforcing the development of the nation’s tourism potentials, including upgrading the provision of services in the sector.

Still in other respects, the meeting  held deliberations on various activities connected with financial allocation and administration, including the possible steps that need to be taken as regards extending loan to small and middle-level private investment ventures. Also in the provision of social services, the Ministerial Cabinet meeting discussed at length ways and means of upgrading the quality of education, enhancing the competence of teachers, equipping educational centers with the necessary laboratory, information technology and other facilities.

Noting the commendable accomplishments registered in extending support to the families of martyrs, disabled persons, orphans and needy nationals, it nonetheless stressed the need to take concerted action towards enabling the aforementioned citizens eventually become self-supporting.

Moreover, the meeting reviewed the action plans aimed at strengthening media works. In this connection, it took note of the progress made in the implementation of various programs, including the development of infrastructure and technical competence of media outlets, upgrading broadcast stations and expanding coverage, digitalizing equipments and nurturing skilled manpower.  The meeting agreed that emphasis should be laid on ensuring quality. Noting the paramount role of media and agitation activities in providing impetus to all-round national development endeavors, as well as portraying the nation’s true image, it decided that the ongoing endeavors should continue with added vigor. In this respect, the meeting conducted extensive discussion on the steps that need to be taken to make the national media credible, reliable and competitive at the regional and international level.

Recalling that the main diplomatic activity undertaken over the past six months was that of dealing resolute rebuff to the illegal Security Council Resolution 1907, the Ministerial Cabinet meeting underlined the major role played by Eritrean nationals through organizing demonstrations and other protest actions worldwide. It assessed that the participation of nationals from different countries of the Horn region, including Ethiopians, Somalis, Kenyans, Sudanese and others in the demonstrations attest to Eritrea’s correct stance and the global awareness. The meeting also took note of the positive outcome of the efforts exerted by the people and Government towards foiling enemy acts of conspiracy. In this respect, it emphasized the vital importance of reinforcing nationalism and popular participation in view of the fact that the nation’s diplomatic activities are mainly anchored on active popular participation.

The Ministerial Cabinet meeting went on to review the action programs of regional administrations envisaged for implementation in the 2nd half of 2010 and beyond. The action programs focus on ensuring food security, promoting urbanization and rural development, expanding service-rendering institutions, provision of potable water supply in both urban and rural areas, expanding social services in education, health, transport and communications.