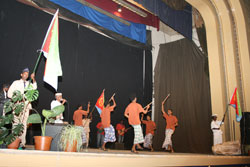 Programs marking Independence Day celebrations are underway here in the capital in a colorful manner.

Asmara, 19 May 2010 – Programs marking Independence Day celebrations are underway here in the capital in a colorful manner.

Accordingly, different songs and drama shows were staged yesterday at the Cinema Odeon, thus adding color to the celebrations.  The shows highlighting the strength and steadfastness of the Eritrean people were presented in both Tigrinya and Tigre languages, which won broad acclaim on the part of the spectators.

One of the spectators, Mr. Grienet Mahmoud expressed admiration to the skill of Eritrean artists and added that the presentations would provide impetus to the resistance and steadfastness of the Eritrean people.

Still another spectator, Mr. Abiel Michael from North Carolina, USA, who arrived here to participate in the 19th anniversary of Independence Day, said that he was deeply impressed with the programs being featured. He further expressed statisfaction for personally witnessing the prevailing peace and stability in the country, as well as the cherished values of mutual respect and co-existence.