The Other Side Of The Struggle For Freedom 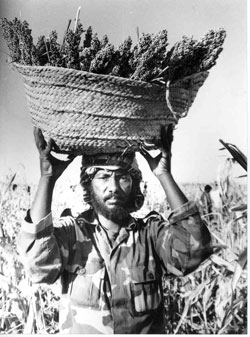 Freedom is everything; if there is freedom peace and prosperity follow in its footsteps. Freedom is an essential entity in everyone’s life but what we witness in the real world is quite the contrary. The invasion and the colonization of the weak and the poor by the powerful and rich seem to be the daily scenario that we witness.  Majority of the developing countries had been colonized by superpowers of the world at one time, and especially the African continent. In the 1940s, many African countries got their independence through armed struggle and few remained under such rule till the beginning of 20th century. Eritrea was one of those that remained as a colony of a neighboring country till 1991, when the country won its freedom after 30 years of armed struggle.

Besides the long struggle, what makes the country’s struggle exceptional is the participation and devotion of the citizens to the struggle. Almost every Eritrean, be it inside the country or outside, Christian or a Moslem, a highlander or a lowlander has contributed a part in the struggle and has played a role in liberating the country.  The people of Eritrea had been colonized starting from the end of the 18th century by different powers, and each one had tried not only to oppress the people but also to destroy the unity and identity of the people. Despite the efforts of the colonizers to break the unity of the people, the people stayed together, and to make matters worse for the colonizers the people were supported each other in every aspect of their life.

Looking back to the times of the armed struggle, what made the struggle successful was the collaboration and unity among the nationals even during the most difficult times. Realizing this fact the colonizers, particularly the Derg and the Haileselassie regimes sought to break the bond among the people. They assaulted, killed and tortured civilians for every defeat the regimes faced in the battle field. In addition to the people’s material support to the freedom fighters many encouraged their beloved offspring to fight along their brothers in the armed struggle.  This was unbearable to the colonizers who were trying to create differences among the people. This and many other amazing aspects of the Eritrean people’s unity and collaboration can’t be told in one attempt, but to mention some: it was in the mid 1960s, where there was severe shortage of water in the country’s capital, Asmara. The colonizers were not concerned about the troubles of the people and didn’t try to solve this problem. Gerazmach Oqbe Haile was one of the prominent residents of the city and when the troubled inhabitants sought help, the Gerazmach didn’t hesitate. Gerazmach Oqbe used to own six trucks for transporting oil and after the residents request for his help; he cleaned and renewed those trucks to serve for water transportation. Those tankers carried water from a town 20 Kms south of the capital, Sheketi twice a day, paying 10 birr for each truck full and distributing the water throughout the city for free. Looking back, Gerazmach Oqbe modestly said that no one should boast about the things he did for his country and people. “We Eritreans don’t talk about what we have done. It is a taboo to talk about what you did and didn’t do.” he added.

The Gerazmach also said that the secret of the Eritrean people’s victory is the unique culture of supporting each other and not boasting about your actions because you know you did it for your people and country.

Regarding the shortage of drinking water in Asmara, he said: “I started the mission as a few days project but before I realized it went on for four months. I travel throughout the city distributing water and when I saw the people satisfied by my services and showed their appreciations by providing me with bread and tea whereever I go; that was my reward. What could be more satisfying that helping your follow citizens.”

Gerazmach Oqbe faced a lot of torture and a threat just for doing what he thought was his duty as a citizen. The colonizers went as far as banning his work through newspapers. Despite all the threats, he stood by the people because that is what every Eritrean is taught from his childhood- support his fellow citizens. And after four months the solution came from nature, there was rain in the city and people got enough water and that is how the shortage of water in the capital ended.

The unity and collaboration among the people of Eritrea particularly in the times of drought, hunger and war grows stronger with time. If there is a drought in one part of the country, people migrate to another part of the country where the inhabitants of the other part receive and treat those troubled people without hesitation. This bond was the only thing that the colonizers could not break. This unity enabled the people to see beyond individualism and win over their enemies; this unity comes from one mutual desire – the desire to have freedom because living with out freedom is worse than dying.