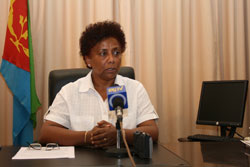 Maintaining law and order in Eritrea could be described as the very essence of the society. It is the culture of Eritrean to abide by laws and customs emanating from a sense of social justice and mutual respect under any circumstances. They have been able to preserve traditional laws despite the length of colonial period. The existence of documented ancient laws is an evidence of the awareness of the society regarding the law. These traditional set of customary laws are maintained and revised by the Ministry of Justice to further promote law and order in the country. In connection with the 19th Independence Anniversary, the Minister of Justice, Ms. Fawzia Hashim conducted an interview regarding the ministry’s activities over the past 19 years of independence. Excerpts follow:

Let us start with the general strategy of the Ministry of Justice?

First, I wish a happy independence anniversary to all Eritrean people. Coming to your question, the strategy of the Ministry is rooted on the basic principles of social justice practiced for long period of time in a way that ensures social security and economic emancipation. The role of traditional values, laws and ethics is vital in raising productivity, self-reliance in general and flourishing economic capacity in particular.   The Ministry of Justice is working by reviewing its guidelines every five years in a manner that reflects reality of people’s lives. This is aimed at upholding social values and reaching the desired level of development.

What is the significance of promoting customary laws?

We are fortunate to have a society that lives in harmony and that abides by law. The history and culture of mutual support and respect has enabled our society to register speedy growth. Most African counties have lost their very identity, culture and language as a result of colonialism. In Eritrea, however, except in the administrative domains, traditional customs and laws had been practiced during the colonial period which played a great role in preserving our culture. Giving due consideration to documented ancient laws, we have outlined rules and regulations in a way that reflects society everyday life.

What development has been registered in the Ministry of Justice?

We have community courts extended all over the country that function by relating customary laws and government laws. The organizational and human resource capability of the Ministry has gradually grown over the past 19 years. The experience acquired over the years has played a vital role in securing social justice and establishing a responsible legal system.

Can you tell us about the investment being made in upgrading manpower capacity?

The Ministry has been engaged in organizing various training courses in addition to regular academic education so as to upgrade the skill of the staff members in terms of knowledge and experience. We have offered training to a total of 180 students of Warsai-Yikealo Secondary School who came from remote areas of the country for one year. These students from all parts of the society have been assigned to work in various parts of the county. Besides, we are making relentless effort towards nurturing legal advisors. Having such kind of professionals is very essential in   dealing with regional and international agreements, as well as in safeguarding Eritrean resources including marine and tourism resources. It may take time, but we are heading towards achieving this goal.

What are the most prevailing cases in Eritrean courts?

Most of the cases are family disputes, question of inheritance, and minor crimes. We are working on identifying crimes that could prevail over time and on how to prevent them. Of course, we don’t have a society that has no respect for the law, nevertheless it is imperative to develop an efficient mechanism.

What about the Eritrean people’s consciousness about the rule of law?

I would be disappointed if anyone tries to educate the Eritrean society about basic laws and regulations. Our forefathers had worked in accordance with the traditional laws since 17th and 18th century. It is a culture of Eritrean society to abide by rules and regulations drafted long ago.   Conducting a research to study these ancient laws and their originality is vital. For this reason, we are planning to print out a 300 page book soon regarding the findings of the research.  I really admire the knowledge of the society as regards the law and I could say Eritrean society is model of unity and discipline.

All nationals should strengthen their efforts to uphold their identity, unity and harmony while abiding by the law and mutual respect for one another. The unrelenting conspiracy designed to weaken our freedom would be resolutely rebuffed by strong resistance of the people of Eritrea.