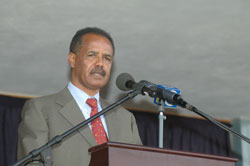 Congratulations! to the patriotic and stanch Eritrean people, as well as partners and friends of Eritrea. Expressing my satisfaction on the occasion of the 19th anniversary of Independence Day,  I would  like to extend deep appreciation to those who organized this auspicious event and to the Eritrean people who provided the celebrations special color, in addition to the guests amidst us.

Compatriots inside the country and abroad
Participants and Invited Guests
Ladies and Gentlemen
Congratulations! to the patriotic and stanch Eritrean people, as well as partners and friends of Eritrea. Expressing my satisfaction on the occasion of the 19th anniversary of Independence Day,  I would  like to extend deep appreciation to those who organized this auspicious event and to the Eritrean people who provided the celebrations special color, in addition to the guests amidst us.

19 years do not constitute a long period in the life of independent countries. Such a span of time is not that long in the process of building a real sovereign and independent nation. However, if we look at the accomplishments and developments that unfolded over the past 19 years no doubt represent much more. The latter 12 years in particular witnessed great accomplishments, taking into account the very trying challenges the nation encountered.  The same applies to the year that just ended.

Before proceeding to the main issues, let me begin with the accomplishments in 2009. In this connection, I would like to refer to the so-called “sanctions” maneuvers against the people and Government of Eritrea disseminated recently.

The issue basically lacks any legality and is essentially designed to cover up other main and fundamental issues, and thereby diverting matters to meaningless direction through derailing the appropriate path.  As such, the people and Government of Eritrea dealt resolute rebuff both in letter and spirit to the conspiracy. On top of that, we have officially challenged the Security Council as regards: 1. What the accusation leveled against us is all about? 2. Who the accuser or accusers are ? 3. Who the arbitrator or judge is? What about its legal authority and methodology? 4. Why our right to self-defense has not been respected? 5. Irrespective of the accusation, its authors and their excuses, our right to self-defense in an independent and just forum should be respected so as to ensure our determination to deal with the issue on the basis of facts, legality and justice. And this because we are well aware of the fact that there exists no accusation based on legal ground, but rather a mere political gimmick deliberately resorted to on the eve of specific holidays.

Hence, as you have just heard in the past few days, the TPLF, its masters and collaborators have submitted their ‘accusations’ to the Security Council in a surprisingly “devious” manner.

Basically, the whole issue is not about hollow and stale accusations, but rather about a simple logic and legal methodology. This being the case, how then or on what ground the Security Council adopted a resolution without any accusation submitted to it and without verifying matters, if the so-called accusations are the very rubbish ones just submitted?  Is there any instance of accepting accusation after already giving verdict?  Doesn’t such a naïve and contemptuous practice constitute a shame to the Security Council itself? And what does the Council has to say on this?

Even though the drama amounts to putting the cart before the horse thus becoming the sole accuser, witness, judge and police in the process, it nonetheless contains nothing new but represents an incident that exposed the bankruptcy of the vicious, accuser and liar parties. Moreover, it puts the Security Council to shame through undermining its dignity on the one hand, while placing the people and Government of Eritrea on high moral ground, and thereby reinforcing the legal national resolute rebuff.

In view of the fact that referring to why all such shame and recklessness leads to properly identify the problems and hence obtain correct understanding, let me now proceed to the main issues at hand.

It is to be recalled that the border conflict was instigated and aggravated 12 years ago. Following a legal arbitration process involving massive interference, a ruling was given in 2002, and still our sovereign territories remain under occupation. If at all the Security Council stands for respect to legality and the promotion of stability, besides advocating respect of international law and the sovereignty of nations, as well as the UN Charter, why then did it fail to ensure justice for us? Why the need for keeping the issue in a stalemate, besides holding hostage both the Eritrean and Ethiopian people, while at the same time exposing the Horn region to turmoil and destruction? By the same token, why try to concoct baseless allegations and excuses in a bid to cover up this fundamental issue?  It is crystal clear that the  issue is a naked crime that does not call for any profound analysis and one that could not deceive even naïve elements.

Nevertheless, the issue of sovereign Eritrean territories under occupation is not to be viewed in isolation from the broader picture of the Horn region and its developments. It is a well known fact that successive administrations in Washington resorted to expose the region to a state of continued turmoil and destruction, as part of  their policy of crisis management through appointing regional puppets. The instability and destruction witnessed over the past 20 years fully attest to this fact. In this regard, Somalia is a typical case in point in which these same quarters exposed the Somali nation and its people to political chaos and civil strife, including massive human loss and destruction of property for the past 20 years. Moreover, direct foreign military intervention and invasion gave rise to the massive displacement of Somali nationals resulting in unimaginable adversity and inhumane crimes. Despite the continued attempts to conceal the crimes being committed in that country, the prevailing sad plight of the Somali people should be examined through an independent body and thus bring the criminals to justice.

The political game of crisis management is not limited to Somalia only. Based on the theory of indirect or substituted administration, successive Washington administrations had tactically turned nations into the ownership of special interest groups in a bid to obstruct peoples from achieving progress and stability. Such political maneuvers and conspiracies on the part of US Administrations and their agent regimes to set off domestic turmoil in different countries is a crime not to be viewed lightly.

In the past 2 decades, particularly the past 12 years, on top of the illegal occupation of our sovereign territories by the TPLF regime, endless economic and political conspiracies, acts of open military aggression, media and diplomatic smear campaigns have been waged against us. But the proud fact remains that the people and Government of Eritrea, despite their limited resources, kept on overcoming all the challenges that came their way and emerged triumphant by all accounts. The growing frustration we see today on the part of enemy quarters is thus a result of this steadfastness.

The acts of conspiracy and hostility through direct interference and proxy in the Horn of Africa in general and Somalia in particular over the past 20 years did not only end up in utter failure but also aggravated from bad to worse. In the wake of the failure of installing two so-called ‘transitional governments’ in Somalia, the same forces are now trying to bolster up “Islamists” which they drove out of Mogadishu in 2006 through giving them regional and international cover. The situation of the current so-called transitional government is also self-evident which constitutes another failure.

The political, military, diplomatic and propaganda subsidies together with the cover-ups and embellishments they make in an attempt to prolong the stay in power of their agent regimes and cliques merely adds to their growing frustration.

Taking into consideration these and other international conflicts, it would not be difficult to discern the gravity of the problem and at the same time the extent of the anxiety caused by the problem. Just as the Arab saying goes “the excuse is far worse than the crime”, it is the attempts to make Eritrea the cause and victim of the failure of such misguided policies that is an even worse crime.

On similar occasion last year, I had stated that putting behind previous injustices, Eritrea was ready for constructive engagement with the Obama Administration, in consideration of the experience we had acquired over the past 20 years and the promise of “change” by the new administration in Washington.

Our proposed policy of constructive engagement did not mean that we would recede into a passive state without taking any action. In pursuing such a policy, we had sought to engage in a direct approach and not through lobbying or mediators. It should be noted here that it requires apt perception so that our practical initiative is not taken for granted or gives rise to attempts of blackmail or manipulation.

Although it is too early in the day to make judgments, since the special interests groups are clearly against any kind of change and seem to have misinterpreted our initiatives for constructive engagement as compliance, they continue to ambush and hinder such efforts. I will discuss the details of these schemes on other occasions, but for now let me assure you that we will not suspend our efforts for constructive engagement regardless of obstructions.

Although I had set out to talk about our development plans and work frame for the coming year on this occasion, in the interest of time I have focused only on briefly explaining the issues I mentioned earlier and will postpone the discussion of our programs for other occasions.

Generally however, we will make productive investments on achieving food security, infrastructure development, provision of social services and prioritized economic multipliers by augmenting our development fund as well as strengthening implementing capacity. Similarly, plans are underway to ease the external and internal factors that have contributed to the pressure on the cost of living and quality of life. We will also implement different projects that would bring about sustainable solutions throughout the country.

Another matter that should be given due emphasis on this occasion is the extensive and resolute demonstration of opposition by the Eritrean people inside the country and abroad against the Security Council’s ‘Christmas Eve’ resolution on 23/12/2009. The determined displays of anger and opposition that gradually developed into highly organized demonstrations by Eritreans and friends of  Eritrea made it clear in no uncertain terms the futility of the attempts to disrupt Eritrea by creating rifts between the people and the leadership or that the sanction will serve in instigating fear and mistrust. On the contrary, it served in giving rise to  strength and vigor that added impetus to their pride and motivation. And I would like on this occasion to express my wish that the entire Eritrean people as always reap their due reward.

I am certain that next year this unyielding drive will with further organization be able to overcome all kinds of challenges and register particular success in realizing national development goals. This drive will also be instrumental in boosting agricultural production aided by good summer rains.

Glory to Our Martyrs!