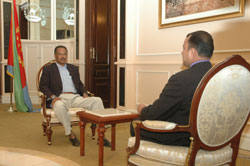 President Isaias Afwerki said that the unity of Yemen is Eritrea’s unflinching stance as amply demonstrated in practice over the past years. The President made the remarks in an interview he gave to Yemeni media outlets on the occasion of the 19th anniversary of Eritrean Independence Day.

Asmara, 25 May 2010 – President Isaias Afwerki said that the unity of Yemen is Eritrea’s unflinching stance as amply demonstrated in practice over the past years. The President made the remarks in an interview he gave to Yemeni media outlets on the occasion of the 19th anniversary of Eritrean Independence Day.

In an interview he conducted with the Yemeni national television and the government-owned Al-Sawra newspaper focusing on Eritrea’s development journey and Eritrean-Yemeni relations, as well as regional and international issues, President Isaias underscored that the unity of Yemen is the cornerstone of peace and stability in the region. And as such, it is in the interest of all countries of the region, and that Yemen’s internal affairs should be left for the people of the country themselves, he elaborated. In this connection, the President underlined that the problem should be resolved without resorting to extremist options and free from external interference.

Noting that relations between Eritrea and Yemen is strategic, President Isaias pointed out that the conspiracies weaved and concocted on the part of external forces with a view to undermining such bilateral relations should be rebuffed through vigilance and maturity. To this end, he indicated that there exists no other option other than designing a clear strategy and practical mechanisms towards reinforcing the historical and people-based Eritrean-Yemeni relations through economic complementarity. The President further asserted Eritrea’s readiness in this regard.

Replying to a question regarding the Somali issue and its impact in the region, President Isaias explained that any attempt that runs counter to the aspirations of the Somali people would never bring about a genuine and lasting solution. As such, creating conducive ground and a political process that involves all Somali parties remain a fundamental prerequisite, he elucidated. The President went on to say that trying to sideline one party and appeasing another, besides resorting to acts of interference on the basis of wrong understanding and calculation continues to fail and on the contrary prolonged the suffering of the people. In this respect, he pointed out that the piracy issue is the byproduct of such a state of affairs, and not a cause in itself. The President stated that such a scenario would continue unless a viable government with potent institutions is established that embraces all Somali nationals.

As regards the Nile River waters and its allocation, President Isaias said that the solution is anchored far apart from political maneuvers. He further noted that the political maneuvers being attempted through forming alliances and clubs is to be rejected, as the Nile issue is the issue of peoples and future generations, and not the current governments. In this regard, the President stressed the need for achieving a lasting solution in a manner that serves for generations and common interests.

Replying to a question regarding the significance of the self-reliance principle in Eritrea’s journey over the past 19 years, President Isaias explained that as far as this country is concerned, self-reliance is not a philosophical or ideological choice, but rather a realistic choice. This being the case, it should not be viewed as a move to live in isolation from the outside world and short of any form of support, he added. “We are not refusing assistance, but the ones that impose precondition. We don’t want to be a hostage and victim of preconditions, nor do we like to be obstructed by it,” the President declared.  In this connection, he stated that the tasks accomplished and the achievements registered over the past years on the basis of internal resources constitute a pride to the people and the nation.