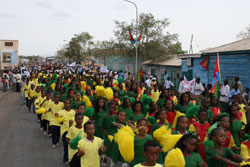 Eritrea is at present celebrating its 19th independence anniversary. As part of the nation wide celebrations, the port city of Assab has vibrantly been celebrating the Independence Day.

The streets of the city were illuminated with colored lights and different programs have been included in the festivity. The celebration featuring different events began from 16th of May 2010 with general knowledge contests that went on for four rounds. Representatives of different ministries and institutions took part in the general knowledge competitions that covered diverse topics of the Eritrean history and particularly highlighted the Denkalia operation that liberated the port city of Assab and other areas of the Northern and Southern Red Sea regions.

The next day, 17th May, as part of the competition programs, contestants made statements that drew comparison between a country and a mother. On the occasion a poem titled Noah’s Ark- a metaphor for the EPLF forces and other poems in Tigrigna and Arabic languages were recited.

In a panel discussion held on 18th May at Ras Gombo Hotel veteran fighters who participated in the harsh Denkalia operation recollected memories of the war and how they surmounted the battle despite the difficulties.

Wednesday 19th May 2010, 2nd round general knowledge competition continued among students of the Woldeab Weldemariam Secondary school. The competition held in Afar language focused on disciplines that include culture, sport, Geography, independence related topics and others.

Sport activities have also been part of the celebrations program that included, cycling, swimming and boat racing.

Though many of the traditional sport activities showcased in the festivity are common among the nine Eritrean ethnic groups, Feroita that is played between two teams each of them having eleven members is typically practiced among the Afar ethnic group. The sport resembles almost the American handball and definitely grabbed people’s attention.

On the 20th May, people gathered at Blien-koma hall to attend briefings on the final Denkalia operation. Major General Gebrezgabiher Andemariam, commander of the operation shared memories of the operation. His briefings emphasized that next to Massawa, Denkalia was very strategic place for the enemy forces.

During the final attack, Denkalia was divided into three operational zones. Tio and its surrounding in the first, Marsa Idi, Afambo, Suduh’ila, and Wadi in the second, the third zone covered Ber’asole, Beilul, Assab, and was finalized at the border with Djibouti.

The Major General explained that war tactics of the EPLF and the attacks launched to capture all water sources within the former Denkalia Province gave the EPLF forces upper hand over the enemy. Then the enemy was forced to retreat from all strategic places and was ultimately driven off into the wilderness of Denkalia.

Sea and land carnival shows held on the 21st May, added further color and magnetism to the celebrations. Moreover, students, children wearing traditional dresses and exercising aerobics, a military parade, marched from Assab’s administrative areas of Blien-koma, Shekatto, and Assebuy made their destination at Ras Gombo Hotel’s beach where the sea carnival was held.

Haleb boat factory, government garage, and different institutions participated in the Carnival. Karate and cultural shows were also among the mesmerizing performances. Around 20 fishing boats waving flags and displaying varied themes make rounds around Ras Gombo Square’s beach and the fisher men aboard on them accompanied the movements with traditional Afari language songs.

Many of the Independence Day activities have been staged at Ras Gombo Hotel’s square. In the exhibition that would stay open until 26 may 2010, people will visit the educational village tents and institutions would showcase their products.

May 23rd, in an exhibition opened to the public at Ras Gombo Hotel’s Square artistic works of sculpture carved from volcanic rocks. Paintings representing different themes of the nation building process as well as cultural activities were also displayed in the exhibition. On a more cultural aspect, traditional artifacts such as hand-woven carpets, ornaments made of beads and other items added more color to the exhibition.

In the evening hours of the same day people from three different administrative areas of Assab gathered in the port city’s stadium where they all gaily joined in the songs and cultural shows. The evening closed with various dance and song performances. Independence celebrations in the port city will continue till 26th of May.