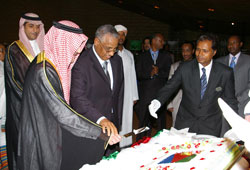 Eritrean nationals residing in Kenya, Riyadh and Jeddah, Saudi Arabia, as well as the Indian city of Pune and Wuppertal, Cologne and Kassel-Germany- have celebrated the 19th Independence Day anniversary with patriotic zeal. Asmara, 27 May 2010 – Eritr

ean nationals residing in Kenya, Riyadh and Jeddah, Saudi Arabia, as well as the Indian city of Pune and Wuppertal, Cologne and Kassel-Germany- have celebrated the 19th Independence Day anniversary with patriotic zeal.

During the celebrations in Nairobi in which many Eritrean citizens  took part, the Eritrean Ambassador to Kenya, Mr. Saleh Omar, commended the Eritrean people including EDF members for their relentless endeavors towards the effective implementation of development programs and safeguarding the nation’s sovereignty.

The participants on their part expressed admiration to the on-going development activities in the Homeland, and reiterated readiness to make due contribution to such undertakings.

Similarly, in celebrations held in Riyadh in which the Assistant of the Emir of Riyadh region, Sultan Bin Abdlaziz Al-Saudi and other officials including the Foreign Minister and others participated. An exhibition was also displayed reflecting the efforts made towards implementing development programs as well as highlighting Eritrea’s resources. Various cultural and sports activities on the part of Eritrean nationals residing in Jeddah and its environs also featured.

Likewise, the Eritrean Ambassador to India, Mr. Alem Tsehaye, gave briefings regarding the objective situation on the Homeland during the Independence Day celebrations held in Pune city. He explained that the investments made in education, agriculture, mining and marine resources point to the nation’s bright future.
Also, in the celebrations conducted in the German cities of Wupertal, Cologne and Kassel various programs were staged highlighting the enormous sacrifices made to achieve independence and safeguard the nation’s sovereignty.