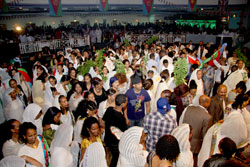 Eritrean nationals residing abroad celebrated the 19th anniversary of Independence Day in a colorful manner, according to reports from different parts of the world.

Asmara, 28 May 2010 – Eritrean nationals residing abroad celebrated the 19th anniversary of Independence Day in a colorful manner, according to reports from different parts of the world.

In the celebrations held in London in which thousands of Eritrean citizens and friends of Eritrea took part, the Eritrean Ambassador to the UK and Ireland, Mr. Tesfamichael Gerahtu, outlined the impressive development achievements registered over the past 19 years. He also called on every citizen to redouble endeavors towards building a prosperous nation.

In the celebrations featuring various cultural presentations, the participants reiterated readiness to live up to the nation’s expectations. They also launched food security and assistance project.

Meanwhile, a special reception was hosted for diplomats, intellectual and expert friends of Eritrea in which they conducted discussion on the objective situation in the nation and its diplomatic activities.

Likewise, Eritrean citizens residing in the Italian city of Milan celebrated Independence Day with enthusiasm. Speaking at the celebrations, the Eritrean Consul General in Milan, Mr. Russom Gebregergis, stated that this year’s

Independence Day has special meaning as it is being marked at a time when the Eritrean people at home and abroad have reinforced their steadfastness and resolute rebuff against the unjust and illegal sanctions resolution. Reports indicated that members of the YPFDJ branch in Milan, children and youths, as well as veteran mothers made significant contribution in the colorful Independence Day anniversary celebrations.

Likewise, Eritrean nationals in Toronto and its environs, Canada, celebrated Independence Day in a patriotic spirit, during which they voiced determination to back up the national development drive.