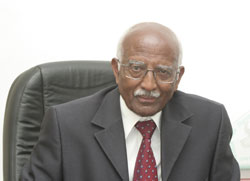 He explained that top attention is being given to the task of constructing water diversion schemes, water reservoirs, micro-dams and roads with a view to backing up endeavors to achieve food security.

Noting that stepped-up activities are being carried out in Tessenei in a manner that facilitates agricultural development, Mr. Abraha indicated that micro-dams previously constructed in the Southern region are being renovated, while irrigation farming is being enhanced.

Moreover, the Minister pointed out that vigorous endeavors have been exerted since 2008 as regards asphalting and construction of roads. He indicated that over 65 kilometers in the construction of the Egla-Foro road has been accomplished which is expected to promote tourism service and improve the people’s standard of living.

The first phase of the construction of Mensura-Himbrti road is also expected to be finalized by 2011, Mr. Abraha added. The Minister went on to say that concerted action is being taken this year in the construction of service-rendering institutions like schools and health centers.

As regards the tasks accomplished in Asmara city, he noted that various roads that used to cause traffic accidents have been repaired and asphalted, while sewerage canals are being renovated at a substantial expenditure. Parallel with this, activities are underway to renew and modernize two sports facilities in the capital. There are also plans to construct stadium in Keren town so as to develop the holding of sports competition there at the national level, the Minister elucidated.

Mr. Abraha further explained stated that the Ministry is undertaking extensive study towards implementing programs with a view to alleviating residential housing problem.