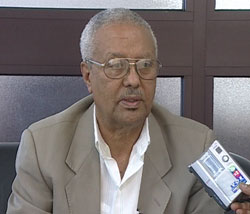 Right after independence, the Eritrean government embarked on constructing and expanding transport and communication facilities as part of the nation-wide development programs. Once very limited, transport and communication facilities have been made widely available almost throughout the country during the past 19 years. Nationals who were deprived of or never had such facilities in remote areas have now become beneficiaries of efficient transport services. The Minister of Transport and Communications, Mr. Woldemichael Abraha conducted an interview concerning the past development endeavors on the occasion of the 19th Independence Anniversary. Excerpts follow:

Would please brief us as regards the achievements registered in the post-independence period?

Can you elaborate on the progress made in the provision of communication facilities?

Efforts have been undertaken to introduce modern facilities in all aspects of communication. It could be said that it has progressed more than people’s expectations. Over 152,000 individuals have become beneficiaries of mobile telephone service. Besides, the number of land-line telephone beneficiaries has risen from 40,000 to about 52,000. This development in the communications sector of the country has brought tangible change in the daily life of citizens. The already attained achievements would be a driving force for realization of the outlined objectives for 2010.

What plans have been made to improve the land transport service?

We can say that the provision of public transport was commendable in past years. The renovation and construction of asphalt roads in all regions has made easier for urban and rural settlers to move without much difficulty in their daily activities. This has opened a great opportunity for the remote area inhabitants to obtain social services.

What can you tell us about the developments in port services and airports?

The port of Massawa was renovated and has actively been conducting its task since the beginning of 1990s renovation of ports project.  The provision of complementary facilities especially the construction of airport would have great significance in the facilitating economic development, particularly in the Free Economic Zone.

The efforts to provide reliable, safe, efficient and modern service in land, air and sea transport have registered commendable progress. The Ministry will reinforce its activities to further improve the transport and communication services in the country.

The Other Side of the Struggle For Freedom (Part II)